Sunspot Update: The Sun quiets down, but just a little

With the posting yesterday by NOAA of its monthly update to its graph showing the long term trends in the Sun’s sunspot activity, it is time for me to do my own update, showing this graph below with annotations in order to provide some context.

While sunspot activity dropped slightly in January, the activity still remained well above the prediction made by NOAA’s panel of solar scientists in 2020, with the upward trend towards a solar maximum much steeper than predicted as well. 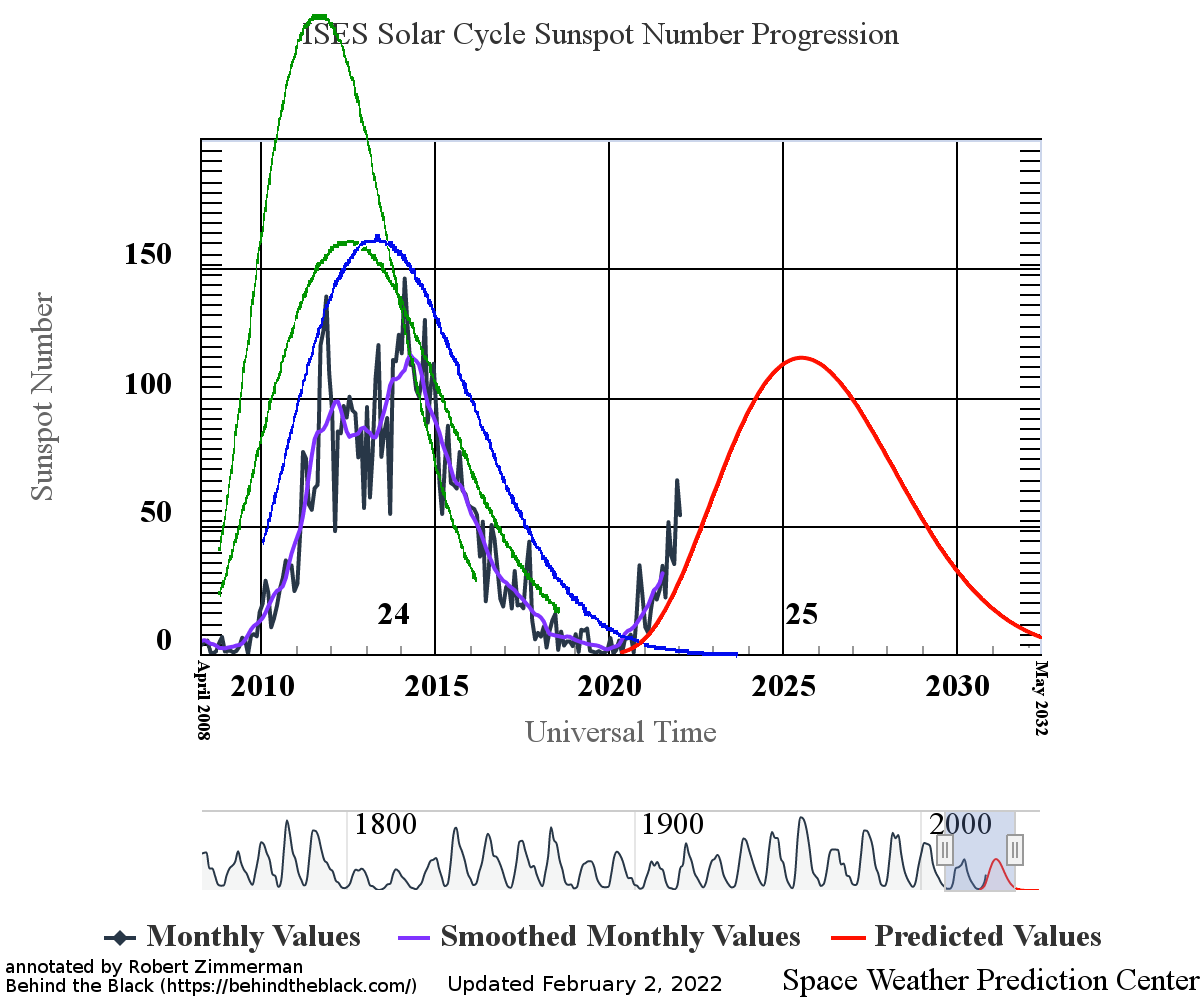 The number of sunspots in January, while dropping slightly from December, was still far greater than the 2020 prediction by NOAA’s panel of scientists. It was also the most sunspots seen in a month since early 2016, almost four years before the Sun hit solar minimum in late 2019. Furthermore, while it took the Sun four years to drop from that activity to minimum, it has only taken it slightly more than two years to return to that activity level. The Sun is ramping up to maximum very fast.

In the past, a fast ramp up like this would be a prelude to a very active maximum, much much higher than the prediction of the 2020 NOAA panel, and more in line with the high 2007 prediction (indicated by the green curve). If so, then the outlier prediction of a handful of solar scientists that this maximum will be a very strong one will turn out to be right, even though that prediction bucked the general consensus of the solar scientist community.

As always, I must note the caveats. First, we don’t yet know how powerful this maximum will be. Despite the fast ramp up and unexpected activity, past performance is no guarantee of future results. We will only know how active the maximum will be once it has happened.

Second, none of these predictions are based on an actual understanding of the processes that create sunspots. Though scientists know the Sun’s dynamo and magnetic field create the spots, and do so in a cycle as the Sun’s magnetic field flips its polarity every eleven years or so, no one understands why the Sun does this, on a fundamental level. All the predictions do is extrapolate from what has been seen in past sunspot cycles to try to guess what the next cycle will be like. With emphasis on the word “guess.”

A very active Sun however will, based on past data, probably act to warm the Earth’s climate, though how it does so remains unclear. One theory, tested with some success by physicists at CERN, suggests that an active Sun reduces the amount of cosmic rays hitting the upper atmosphere. This in turn reduces the cloud cover, which then lets more sunlight in so that the climate warms.

If the climate does switch from its long pause in warming during the first two decades of the 21st century to a warming period in the 2020s, it is certain that global warming activists will immediately use that warming to claim that human activity is the cause, and we must restrict or end the use of fossil fuels, no matter how impractical or costly.

That claim however will be specious if those activists do not consider solar activity as a factor. While human activity and the increase in carbon dioxide in the atmosphere might be the cause of that warming, increased sunspot activity by the Sun could also be as if not more important. Good science demands that we look at all the data, not just the data that pleases us.