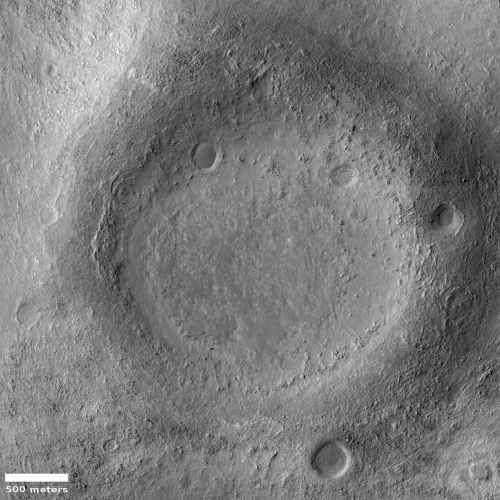 The constant stream of images and data that our orbiters and landers are feeding down to us from Mars can sometimes give the impression that the red planet is being thoroughly explored. Today’s cool image illustrates how this impression is false, and instead shows a hint of what remains untouched on the fourth planet from the Sun, a planet with the same land area as on Earth.

The photo to the right, cropped and reduced to post here, was taken by the high resolution camera of Mars Reconnaissance Orbiter (MRO) on May 10, 2020, and shows a strange crater on the north interior edge of Argyre Basin, one of Mars’ largest basins located in the southern hemisphere. Not as deep or as large as Hellas Basin, what I call the basement of Mars, Argyre is still the second largest such basin on Mars, about 1,100 miles in diameter with its lowest elevation 17,000 feet below the surrounding southern cratered highlands. Like Hellas, it is thought to be the remains of major impact.

The point of this post is not to try to explain the geology of this crater. Located at 45 degrees south latitude, it might or might not be showing us glacial evidence. The nature of the terrain is inconclusive. To figure out the geology here would require a lot more data, and a focused interest in studying it.

Instead, this image shows us how little we know of Mars. For example, this photo was not requested by any scientist doing specific research. It was requested instead by the science team for MRO’s high resolution camera because they need to take images at regular intervals to maintain the camera’s temperature, and if no one has requested an image for a specific time period, they make their own choice, picking a spot that might be interesting without knowing sometimes what they might find. Often such “terrain sample” images are somewhat boring. Other times they reveal some surprisingly interesting geology.

The map below gives a sense of how little of the Argyre Basin has been explored by MRO’s high resolution camera. 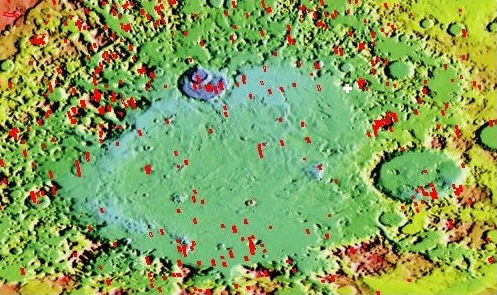 The red boxes indicate where MRO has taken hi-res photos. The cross indicates this photo’s location. Notice the wide scatter of images within the basin, compared to the high number along the basin’s perimeter, where the terrain is at first glance more dramatic and thus more interesting. Apparently there is a dearth of planetary scientists studying the floor of this basin, even though some scientists hypothesize that the impact that created the basin four billion years ago hit an ice sheet that melted into a large sea of water that took thousands of years to refreeze, and was thus a potential home for Martian microbiological life.

We today are blessed at being born at the very beginning of the space age, the human race’s first attempts to explore the universe beyond Earth’s atmosphere. The mysteries and unknowns hidden out there are legion, and in science (as in life) the mysteries and the unknowns are the most important. Even on Mars, which had been the focus of intense exploration during the past two decades, our knowledge remains limited and scattered. A full understanding will take at least a few more generations of exploration.

I envy the future generations this task. It will be exciting, ennobling, and above all, a whole lot of fun.