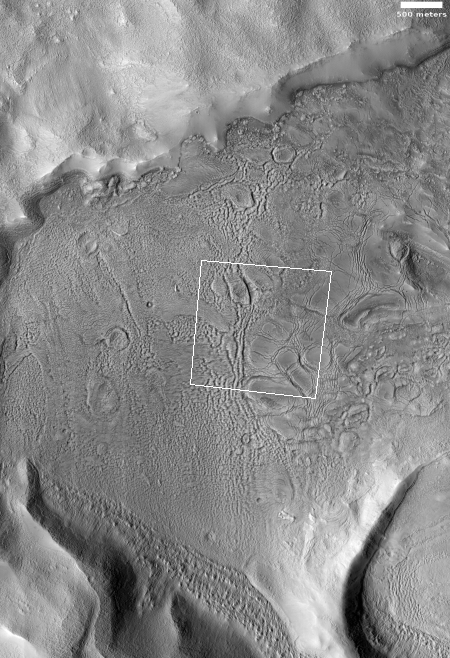 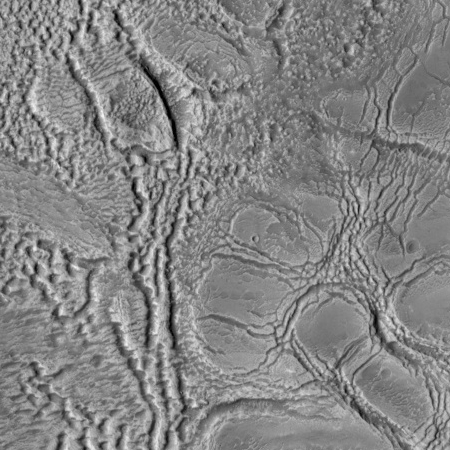 Cool image time! In my never-ending review of new images downloaded each month from the high resolution camera of Mars Reconnaissance Orbiter (MRO), I came upon an image dubbed merely “Terrain Sample” in the August release. To the right, cropped and rotated to post here, is the weird terrain from that image, with the section in the white box shown below at full resolution.

To keep MRO functioning properly, they need to take images on a regular basis, even if they have no planned features coming into view. As noted by Singleton Thibodeaux-Yost, the HiRISE Targeting Specialist at the University of Arizona who requested this image,

It was not taken in response to a suggestion from the public or our team database. This image was a ride-along with another instrument on MRO. [The scientists for that other instrument] targeted this region for a particular reason and we just turned on our camera as well to gather more data while they collected their data. I title these types of images “terrain sample” as we don’t always know what the results will be.

In other words, the scientists running the high resolution camera have no inkling what they will see until see it.

This image shows the inside rim of a crater, with the crater rim to the south just beyond the image’s bottom edge. This somewhat large crater is located in the middle of Arabia Terra, one of the largest regions of the transition zone between the southern highlands and the northern lowlands (where some scientists believe an intermittent ocean might have once existed). This transition zone has many features that suggest a tidal basin on the edge of that ocean.

A few months ago I would have been entirely baffled by what we see here. I might have speculated that these strange features were another variation of that shoreline region. Maybe these features are the erosion one sees on a dried lakebed after the water has drained away.

I might have also speculated that these shapes looked like the kind of frozen ice blocks one sees in the icecap of the Arctic here on Earth.

Both speculations then would have been complete guesses.

I now know, based on things I have recently learned in writing about several other images from MRO, that the second guess is likely right (though of course my opinion as a very amateur planetary geologist should not be taken very seriously). My reasons?

First there is the crater’s location. Not only is it in that transition zone, with many features that suggest all types of water erosion and a shoreline, it is also at latitude 32 degrees north, placing it within the bands that run from 30 to 60 degrees latitude where evidence of glaciers are found on Mars, both in the north and south hemispheres.

Second, there is the crater itself. The image to the right, rotated, cropped, and reduced to post here, was taken by the context camera on MRO, designed to take wider images to provide a wider look at the entire Martian surface, at a somewhat lower resolution. The partial white box near the bottom left indicates some of the area covered by the first image above.

As you can see from this image, the crater is one of those craters that appear to have a circular gully or depression just inside the rim, with the crater floor a plateau in the middle. With this crater however the central crater floor is very broken up, with every feature appearing very eroded. The strange features highlighted today are found inside that circular gully.

Taken all together, these facts strongly suggest that these strange swirling blocks are a variation of a Martian glacial feature that scientists have dubbed concentric crater fill. With such craters, there is enough ice that the glacier mostly fills the crater, with it forming concentric terraces stepping downward from the crater’s rim and central peaks. (see the image I posted here.)

In this case, the glacier does not form concentric rings. Instead, it appears that there is less frozen water present. Either the crater did not have as much water to begin with, so that the glaciers that did form in this circular ring are more chaotic and smaller. Another explanation might be that the glacier has mostly eroded away, and we are now looking at the glacier’s last remnants.

A third explanation, suggested by the overall eroded condition of the crater, is that the crater is very very old, and that when the glaciers first appeared here its rims were already greatly eroded and broken up, allowing the glaciers to form both inside and outside the crater and flowing across those broken rims, acting to further erode it.

And of course, all of these speculations could be wrong. To really understand what happened here it will be necessary to fit this terrain into the overall geological history of Mars, including the formation of that intermittent ocean and how its existence shaped the transition zone of Arabia Terra.

What is largely known now is that Mars is in a post glacial period, with all the remnant glaciers in those mid-latitude bands slowly sublimating away. This image appears to show a crater near the southern edge of one of those bands near the end of that process.

Finally, to give full context, below is a map of Mars, the location of this crater shown by the blue dot. The map also shows the location where we have and are going to place landers and rovers. 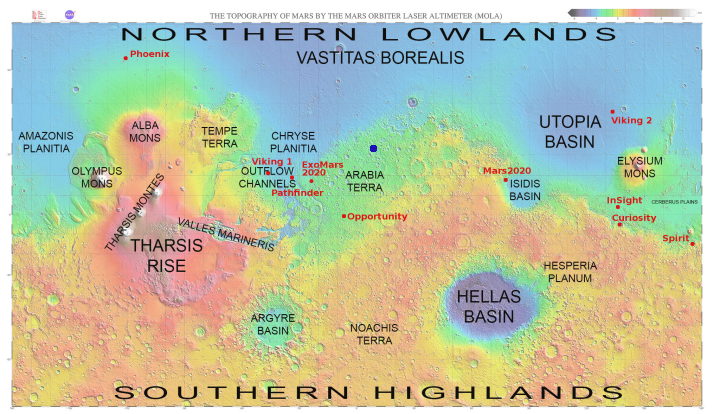