The overview map to the left indicates the general terrain surrounded today’s cool image. The white rectangle is the area covered by this image, taken on July 4, 2020 by the high resolution camera on Mars Reconnaissance Orbiter. If you look close you can see that this photograph covers the eastern rim of what looks like an ancient and mostly buried crater on Mars. This unnamed crater is about 17 miles across.

If you were to look first at the photo to the right, showing the entire area captured by the full image, it would not be obvious that these mounds and hills are the rim of a large crater. They are well eroded, and seem to be independent hills on a flat plain. The northernmost hill also appears to have sedimentary layers in its western slope, suggesting a long-term formation process, not an instantaneous impact event carving out the entire hill.

One also expects to find a lot of rocks and debris ejecta on a crater rim, crushed and broken apart and flung there when the impact took place. Even if much of that debris melted because of the heat of impact, the many images of other craters on Mars and the Moon leave us to expect this rim to be more rugged than these soft rounded hills.

The rims of craters are also generally unbroken, not separated by numerous gaps as we see here.

Yet, this is a crater rim. Taken all together, these conditions strongly imply a very very old crater which has been eroded over a very long period of time.

Still, that age does not explain everything we see. For example, it appears that the elevation of the crater’s interior is the same as the surrounding plain. Normally a crater’s floor sits lower, having been excavated by the impact.

Yet, neither the overview map above or the full image to the right shows any change in elevation as you travel westward through the gaps in the rim into the crater’s interior.

The scattering of smaller craters also raises questions. These later impacts appear to have occurred equally on both the rim and the flat surrounding plain, suggesting that something covered the surface both in and out of the crater, to the same elevation, and did so a long time ago. The subsequent small new impacts were then laid down across the entire new surface.

The wide overview to the right provides us a possible explanation of what we see in the photo. This crater and its rim is located in what I like to call Mars’ volcano country, To the east is the Tharsis Bulge, with its giant volcanoes. To the west is Elyisium Mons and the vast lava flood plains that surround it.

Thus, this crater, after many eons of erosion that rounded and softened its rim while cutting many gaps within it, could have been filled by a flood of lava that covered everything with a single flat layer, with only the highest peaks of the rim sticking up above the flood.

In addition, this crater sits on the edge of the Medusae Fossae Formation, the largest volcanic ash deposit on Mars. The volcanic eruptions that flooded this region also rained gigantic amounts of ash onto the surface. Much of what we see could be that ash, comprising the surface’s top layer. 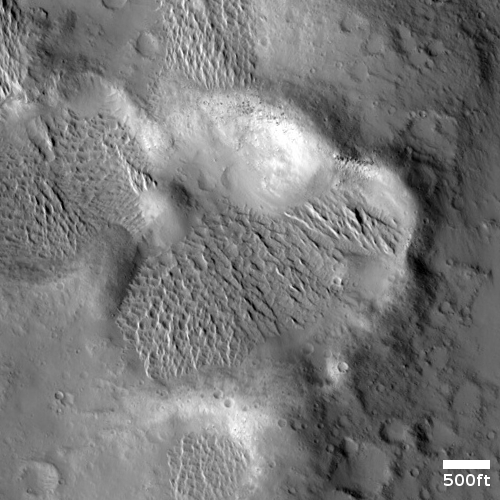 The last image to the right zooms in on the weirdly shaped depression near the center of the full image. This depression might have been created by several simultaneous impacts, or maybe it is a giving us a hint of the rough crater rim that once existed here and has been eroded away and then buried by lava.

The dunes within, with their complicated interweaving shapes, is likely ash from the Medusae Fossae Formation. This crater is on that ash field’s edge, so any material blown here will tend to get trapped in depressions and craters, building up and forming dunes. In fact, it does appear that the interior of this depression sits a bit higher than the surrounding terrain.

Everything I have written above however are all suppositions, based on my limited knowledge of what we know so far of Mars. New information, as well as old information that I am unaware of, could easily change these conclusions. What is certain is that this is the rim of a very old Martian crater, changed and reshaped in the eons since its impact.