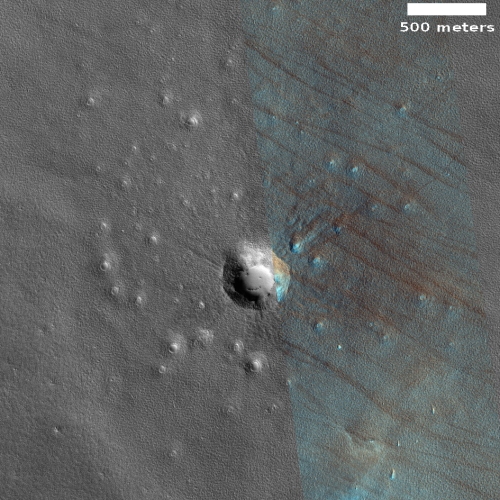 Cool image time! The photo to the right, cropped and reduced to post here, was taken on October 26, 2020 by the high resolution camera on Mars Reconnaissance Orbiter (MRO). It is what the camera team calls a “terrain sample,” meaning it was not specifically requested by a researcher but was instead chosen by the camera team because they need to regularly take images to maintain the camera’s temperature. When they do this, they try to pick a location that hasn’t been photographed in high resolution previously, and that might have some interesting features. Sometimes the photo is boring. Sometimes they hit pay dirt.

In this case, the photo captured an small impact crater, about 1,300 feet across, surrounded by a spray of secondary impacts. The color portion of the image shows what I suspect are dust devil tracks cutting across a surface that, because of its blue tint, is either rough or has frost or ice within it. At 48 degrees north latitude, the possibility of the latter is high, especially because this location is northwest of the Erebus mountains, where SpaceX has its prime Starship candidate landing zone and where scientists suspect ice is readily available very close to the surface. The overview map below shows this context. 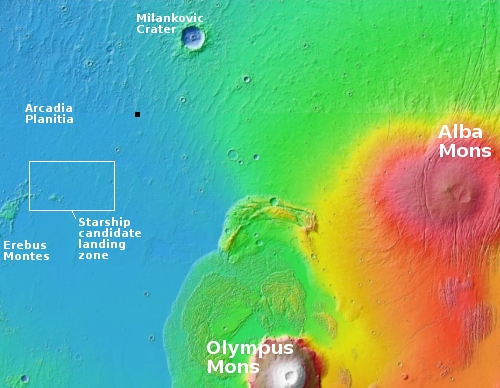 The hypothesis is reinforced by taking a look at the immediately surrounding terrain. 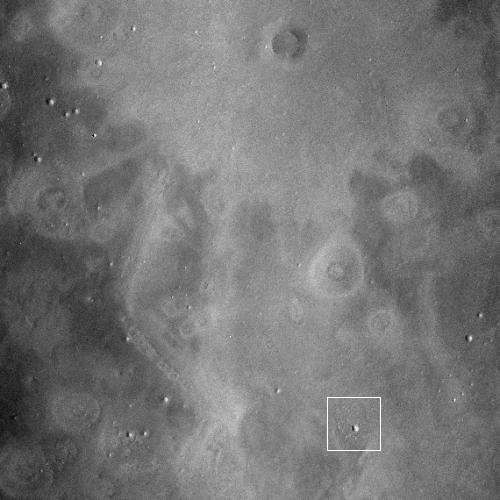 To the right is a wider view, with the white box showing the location of the top image. It was taken by MRO’s context camera. As you can see, this small impact crater is only one of many, scattered across a relatively smooth and flat region interspersed with what look like small volcanoes.

All of the small craters look to be about the same age. Moreover, that there are no large or more eroded craters here suggests that the small volcanoes, which either formed from magma or mud pushing upward, had covered over the older terrain, became inactive, and then the Milankovic impact occurred, showering this region with secondary material.

This shouldn’t be surprising. At this high latitude, north of what is believed to be a very icy region near the Erebus Mountains, ice should be plentiful, just before the surface.