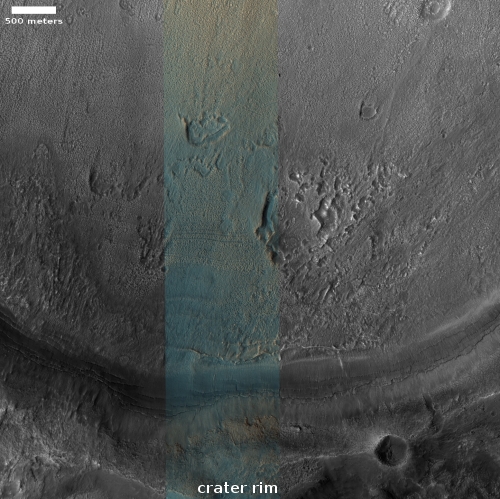 Cool image time! The photo to the right, rotated, cropped, and reduced to post here, was taken on March 12, 2021 by the high resolution camera on Mars Reconnaissance Orbiter (MRO). It looks down at small six-mile-wide Apt crater in the northern lowland plains of Mars located at about 40 degrees north latitude. The image’s focus were the layers on the crater interior rim as well as the eroded glacial features on the crater’s floor. The color strip suggests [pdf] that the bluish material on the north-facing south interior rim and floor are likely icy, while the tan-colored material seen in the crater’s north half are likely dusty.

While the suggestion of glacial material on the crater’s interior is very typical for many craters in the mid-latitudes, what makes this crater of interest is its location, only a short few miles south of that mesa on Mars that for decades the shallow-minded insisted was a face and proof of an alien Martian civilization. 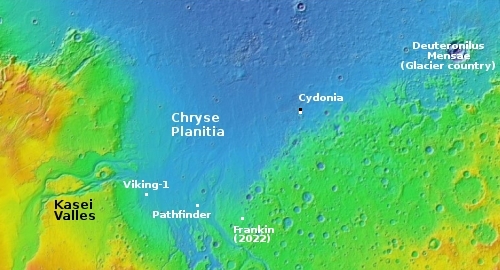 On the overview map to the right the black dot marks the location of that non-face on Mars, which has been imaged now at high resolution numerous times, and shown unequivocally to be nothing more than an ordinary mesa. The white dot just below it, only a few miles away, is the subject crater above.

The region the crater is in is dubbed Cydonia, the unusual geography of which helped encourage the many wild theories about Martian civilizations during the past few decades. As I noted in a post about Cydonia in March 2021,

Cydonia sits mostly in the northern lowlands. Though the region has many knobs and mesas that resemble the chaos terrain like the glacier country in Deuteronilus Mensae to the east, much of its chaos appears to be in its final stages of erosion, so that it is more a plain of small knobs and mesas than a region of cross-cutting canyons with large mesas in-between. Thus if there is buried ice here, rather than finding it in glaciers flowing off mesas it is more probably locked in underground ice sheets, as suggested in the lower right of today’s cool image.

Apparently, based on the image above, the craters in Cydonia do have glacial features. 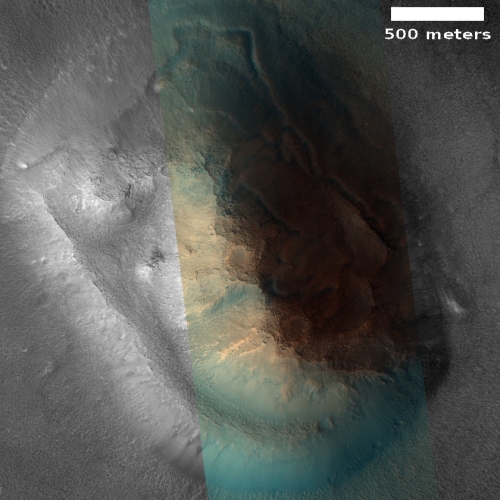 Now for Mars’ nearby non-face, shown in the image to the right, cropped and reduced to post here, and taken on April 5, 2007 by MRO’s high resolution camera. As one of the first images of the “face” taken by MRO, it confirmed what Mars Global Surveyor had already proven years before, that this is nothing more than a mesa.

However, looking at the mesa with the knowledge we now have of the large amount of glacial material found in the mid-latitudes, the features on it now make some sense. Notice for example the broken layers on the mesa’s north side. These suggest glacial material, as if a corroding glacier is resting against that slope. Anyone who has been to Glacial National Park will recognize the features.

The color strip also reinforces this conclusion. Like the crater above, the tan colors on the mesa’s top suggest dust and dirt, while those glacial-like slope features have bluish tones that suggest the presence of ice.

The face on Mars was not a face, but it now reveals something about Mars that for future colonists that is quite significant. There is water here, accessible for the future human Martians to drink.