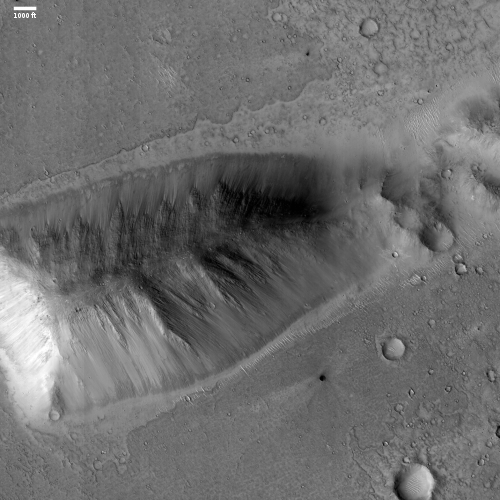 Cool image time! The photo to the right, rotated, cropped, and reduced to post here, was taken on August 8, 2020 by the high resolution camera on Mars Reconnaissance Orbiter (MRO). Labeled merely as a “terrain sample,” it is an example of an image taken more for engineering than scientific reasons. No research scientist specifically requested it. Instead, the scientists operating the camera took it because they need to use MRO regularly to maintain the camera’s proper temperature. To do this they periodically take almost random images, but never without trying to pick a location that might have some scientific value.

In this case we get what appears to be an isolated sloping hill. Located at about 15 degrees north latitude, this is not a place where one would expect visible evidence of water, though the gullies on the slopes are intriguing. They almost look like the kind of hillside erosion you see in places where rain falls on desert mountainsides.

Rain can’t be the cause, but nonetheless monitoring these gullies for changes over time would be worthwhile science research. Since it appears no one is presently focused on doing it, anyone interested out there?

This mountain is actually far more isolated than this high resolution image suggests. 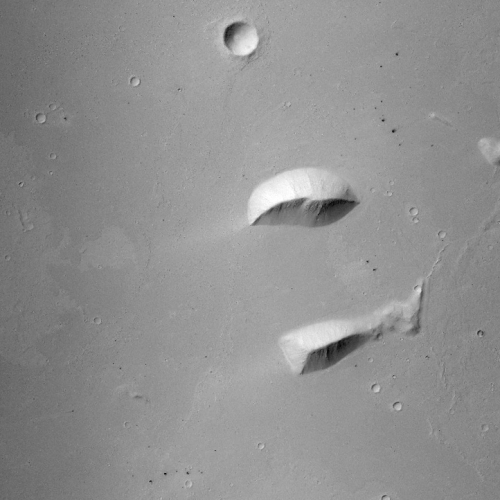 The image to the right is a wide shot taken by the context camera on MRO. The hill in the first photo above is the bottom of the two in this picture. As you can see, these two hills stand out against a remarkably flat plain. If you look at the full image, you will see that this plain is even far larger, extending for many miles in all directions. The plain is also remarkably lacking in craters, which strongly suggests its surface is very young.

The map below provides I think the basic explanation. The hill’s location, as indicated by the white box, is about 650 miles to the southeast of the giant shield volcano Elysium Mons, and about 250 miles to the northeast from the lava outflow channel dubbed Athabasca Valles. The latter produced in a matter of only a few weeks a lava flood plain about the size of the British Isles, apparently flowing to the southwest away from this hill, as shown on the map.

The lack of craters suggests this hill is surrounded by a similar relatively young lava field, produced by an eruption from some as-yet unidentified nearby volcanic event. A close look at the features at the base of the hill’s slopes strongly suggests that the lava flow came from the west, flowing around the hill as it moved eastward.

The surrounding flood plain also suggests something quite fascinating. It suggests that these two hills are actually the peaks of much larger and older mountains, buried by the lava plain that now surrounds them.

How tall were these mountains when exposed? That is unknown. They likely come from the cratered Mars of the early solar system, during the Heavy Late Bombardment when the inner planets were being peppered by many impacts as the Sun’s debris disk was consolidating into the planets we see today.

Now, all these short hills do is hint at a very different ancient and hidden Mars, covered by the extensive Martian volcanism that engulfed the surface of this entire vast region.