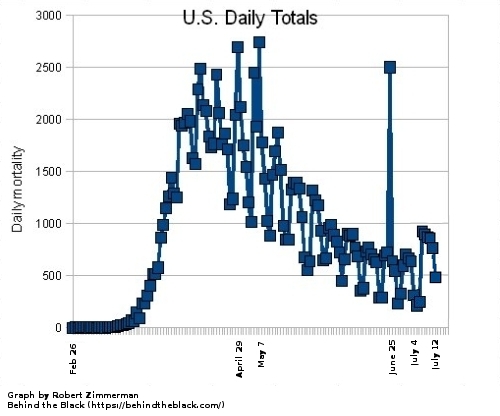 But we’re all supposed to die! Even though the last week has seen a slight uptick in the number of daily deaths from COVID-19 (as shown by the graph to the right [source]), the CDC’s latest data update, through July 4th, notes that as of that date the overall death rate put the Wuhan virus below their “epidemic threshold.”

Based on death certificate data, the percentage of deaths attributed to pneumonia, influenza or COVID-19 (PIC) decreased from 6.9% during week 26 to 5.5% during week 27, representing the eleventh consecutive week during which a declining percentage of deaths due to PIC has been recorded. The percentage is currently below the epidemic threshold but will likely change as additional death certificates for deaths during recent weeks are processed. [emphasis mine]

In other words, at the beginning of this month the numbers said the epidemic was over. To underline this point, the CDC’s totals also include deaths from pneumonia and influenza, which therefore reduces the death rate for the Wuhan flu even more.

The increase in deaths during the past week probably reflects the increased number of cases in the past month. It also partly explains why the CDC has not officially declared the epidemic over. They expected the death rate to rise, and it has. 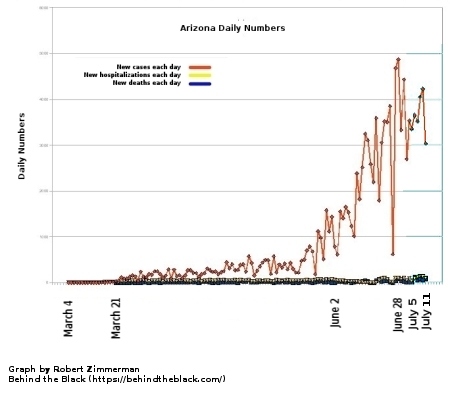 This is clearly illustrated by the situation in Arizona, as shown in the graph to the right. Despite the fast rise in new cases (hyped absurdly by our bankrupt mainstream press), the number of deaths and hospitalizations has simply not kept pace.

We can draw two bits of good news from this data. First, it appears that the virus is losing it deadliness, either because the general population is gaining herd immunity or because the virus itself is beginning to die.

Second, the numbers once again show that the virus’s overall death rate is probably not much worse than the flu, and also poses almost no threat to the healthy population, especially those under 65. Most of the deaths are among those over 65 who are also sick from other chronic illnesses.

Furthermore, the risk from this disease is also mostly confined to residents of the northeast, specifically in New York, New Jersey, Connecticut, and Massachusetts. Those four states alone account for 42% of all deaths nationwide. Or to put it another way, if you lived anywhere else and were below the age of 65, your chances of dying from COVID-19 were practically nil. And if you are a resident of these four states but are below 65, your risk also remains almost as low.

This is an epidemic of the aged ill, concentrated mostly in the high population density regions of the East Coast. The rest of the country should simply stand down from the harsh measures of social distancing, masks, isolation, and lock downs. We really can return to normal life.

In fact, we should never have abandoned that normal life. The data in the beginning pointed in this direction, and nothing that has happened since has suggested otherwise. All we had to do was focus on protecting that elderly population while the rest of us went on with our lives, and all would have been well.

Instead, we panicked, and along the way the panicky elected Democrats in charge in New York, New Jersey, Michigan, and Pennsylvania actually made things even worse by taking actions that actually increased the death toll among that vulnerable elderly population. They mandated that nursing homes had to accept sick patients, thus exposing that vulnerable population directly to the virus and killing thousands unnecessarily.

Because if we don’t we will bring misery not only to ourselves but our children for generations to come, far in excess to anything that COVID-19 has wrought.