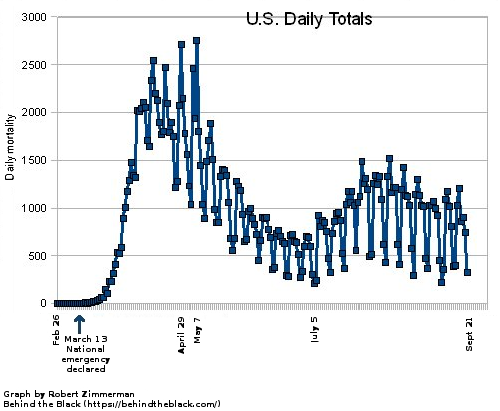 The lockdowns will never end: Despite the continuing and steady decline in COVID-19 deaths and cases, most state governments are vowing to maintain their lockdowns and mask mandates, some forever or until a vaccine is found.

Numerous high-ranking public authorities throughout the United States have pledged to continue enforcing COVID-19 restrictions — including social distancing rules and mask mandates — even as cases of and deaths attributed to the virus continue a steady two-month decline throughout the country.

Those officials have signaled that the restrictions will not be lifted unless and until an effective vaccine is developed, approved, distributed throughout the country and utilized by enough of the population to create functional herd immunity.

The graph to the right, compiled from this source, shows clearly that the epidemic is fading, and even at its peak never came even close to the terrifying predictions, all now proven to be wrong, of a lot of health officials and junk modeling scientists.

In fact, the numbers continue to show that coronavirus is really nothing more than a bad flu. Like the flu, it is relatively harmless to the young and healthy, who either will show no symptoms from it at all, or might get sick for a week or so and then recover completely. And like the flu, it is only really dangerous to the old and sick, who already have serious health problems which make them vulnerable to any new illness.

Note too that the average age at death from COVID-19 is about 78 years old, which is also identical to the average age expectancy of Americans. In other words, the disease did little to change the number of deaths at all. Even if there were excess deaths this year, they were not much more than we’ve had in previous bad flu seasons, and those additional deaths had no effect on the general population.

For such a disease, you do what we have done for centuries, you protect the weak, and let everyone else live their lives normally. We did not do this this time, and are now suffering from it.

Worse, too many people seem unwilling to accept the reality that the epidemic is ending. Instead, they get outraged by anyone who even suggests such a thing. They have fallen in love with their fear, and want to embrace it, forcing masks and restrictions on everyone forever, just so that they have a false sense of safety.

Unfortunately too many of our fascist governors and health bureaucrats have decided to take full advantage of that panicky fear and use it to gain more power over everyone. As it is said, power corrupts, and absolute power corrupts absolutely. For the past six months we have seen a perfect demonstration of this.