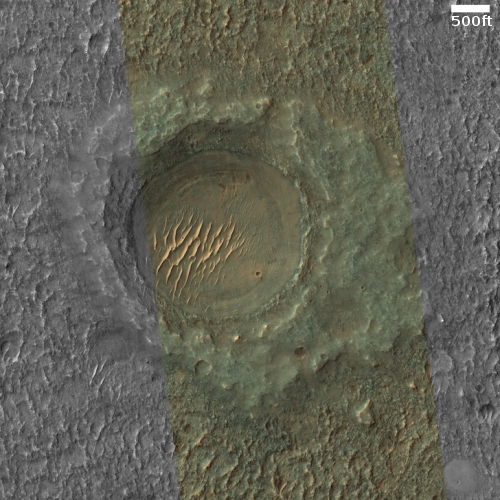 Cool image time! The photo to the right, cropped and reduced to post here, was taken on February 2, 2021 by the high resolution camera on Mars Reconnaissance Orbiter (MRO) and was labeled as “Exhumed Craters Exhibiting Concentric Fill”.

The term “Concentric Fill” is used by planetary scientists to mark glacial-type features frequently found inside craters at latitudes greater than 30 degrees latitude. This crater however is at 22 degrees north latitude, too close normally to the equator to expect a buried glacier inside it. Any ice at such a latitude is expected to be underground and well protected. A debris covered glacier would likely sublimate away, which I think is why the scientists labeled this “exhumed.” Though there are the concentric features near its inside rim as well as covered by the sand dunes on the crater’s floor, they are assuming this is only evidence of past ice, no longer there. This assumption is strengthened by the splattered but eroded nature of the surrounding terrain. Such splats are typical of high latitude impacts in regions with ample buried ice. The eroded nature of this splat however suggests it is very old and has likely lost its ice.

Then again, this is an assumption. 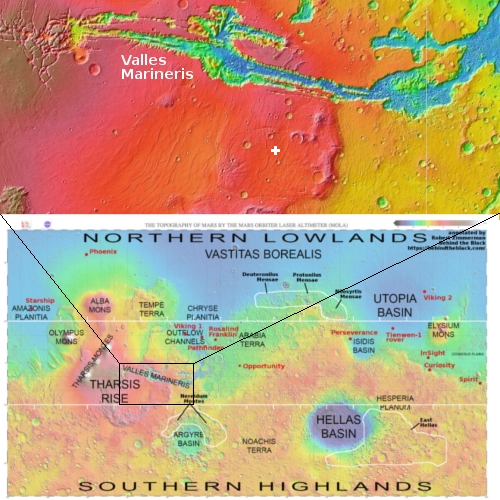 Click for the high resolution global map of Mars.

The overview map marks the location of this crater by the white cross, placing it about 300 miles south of the solar system’s largest known canyon, Valles Marineris. This map also shows that the crater is at a high elevation on the volcanic Tharsis Rise. Could that high elevation help preserve buried ice because of the generally colder climate? Maybe, but the high elevation also means more sunlight and thus more radiation to help sublimate that ice. If there is buried ice here however it will expand the regions on Mars where water will be readily available, merely by digging.

The overview map to the right also provides a global view of Mars, something I have not posted enough. It thus provides the larger context for my readers, who normally don’t get to see maps of the whole planet in my many cool image posts. It also can provide a nice geography lesson for those who wish to gain a better global sense of Mars, as presently understood. If you want to look at the map at full resolution, click on the overview image.

The map not only names most of the major features on the planet, it also marks with white borders the regions above 30 degrees latitude on Mars where scientists have detected evidence of many glaciers or buried ice. In addition it notes the landing spots for all the successful past rovers and landers, as well as the landing zones for future rovers, landers, and even manned spacecraft (specifically SpaceX’s Starship).

For those interested in figuring out the places on Mars to build those first colonies, whether you are an engineer or science fiction writer, this map will be very useful. Feel free to distribute, with the only requirement I ask is that you credit me and Behind the Black.