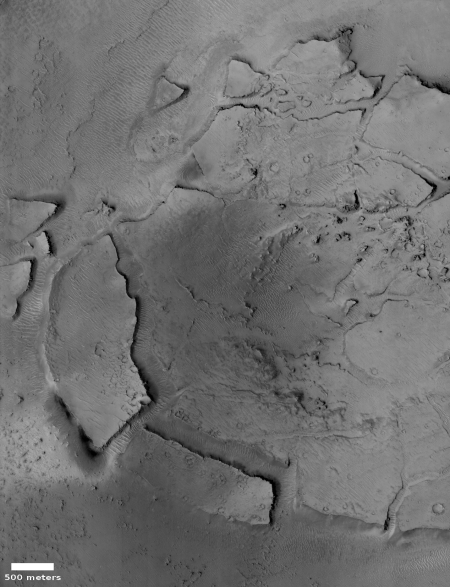 Time for some puzzling Martian geology. The image on the right, rotated, cropped, and reduced to post here, comes from the Mars Reconnaissance Orbiter (MRO) high resolution archive, and shows a strangely collapsed and fractured crater floor. In fact, like a number of other Martian craters, rather than having a central peak, the center of the crater floor, shown at the image’s center right, seems depressed.

The crater is located in a region dubbed the Cerberus Plains, in a hilly subregion called Tartarus Colles. Of the transition zone between the northern lowlands and the southern highlands these plains comprise the second largest region.

Being in the transition zone I would guess that the geology here is strongly influenced by the ebb and flow of the slowly retreating intermittent ocean that is thought to have once existed in the nearby lowlands. As water came and went, it created a variety of shoreline features scattered about, but not in a single sharp line as we would expect on Earth. Think more like tidal pools, where in some areas water gets trapped and left behind only to sublimate away at at later time.

We can see some hints of these processes in the images of the floors of two other craters that I have previously highlighted, here and here.

With this geological overview in mind, the broken plates here remind me of features I’ve seen in caves. Mud gets washed into a passage, partly filling it. Over time a gentle water flow over the surface of the mud deposits a crust of calcite flowstone on top of the mud. Should the water flow suddenly increase, it will wash out the mud below the crust. If the crust is not very strong or thick, it will crack into pieces as it falls, and thus resemble what we see here in this Martian crater.

There are cases where the crust becomes thick enough to remain standing, which produces some spectacular hanging calcite draperies that seem to defy explanation.

The collapse in the center of the crater is more puzzling, but suggests, based on comparable-looking Earth geology, that any perched water in this canyon might have actually drained out through underground drainage, accessed through the depression.

Be warned: All my explanations above are based on what exists on Earth, and Mars is very different from Earth. The lower gravity, colder temperatures, and different chemistry guarantee that the geological processes there will not be identical. We start by using what we know here, but recognize that we need to learn more about Mars to truly understand what goes on there.