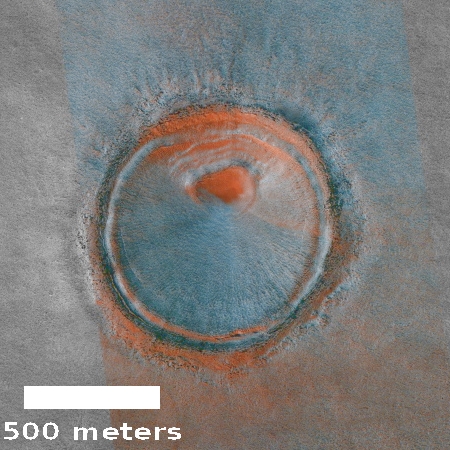 Today’s cool image could be a sequel to yesterday’s. The image on the right, cropped to post here, was one of the many images released from Mars Reconnaissance Orbiter’s (MRO) high resolution camera in March. The release, uncaptioned, calls this a “fresh impact crater.”

In many ways it resembles the craters I posted yesterday, with a splashed look and a crater floor with features that favor the north. Why that divot exists in the northern half of the floor is to me a mystery. The crater floor looks like a sinkhole to me, with material slowly leaking downward at that divot to cause this surface depression. Yet the rim screams impact. And yet, why the double rim? Was this caused by ripples in wet mud when the bolide hit? 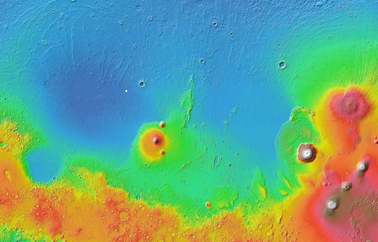 The crater itself is all by itself deep in those northern plains. You can see its location as the tiny white rectangle slightly to the left of the center in the overview image to the right. The giant Martian volcanoes can be seen at the image’s right edge, almost a quarter of a planet away. This is at a very low elevation on Mars, almost as deep as Hellas Basin.

For some fun context, this location is very close to where Viking 2 landed in 1976. The Mars 2020 rover meanwhile will land at this overview image’s left edge, on the western shore of the oval cut into southern highlands at about the same latitude as Olympus Mons, the largest volcano on the right. And InSight and Curiosity sit almost due south, with Curiosity in the yellow in the transition from green to orange, and InSight to the north in the green.