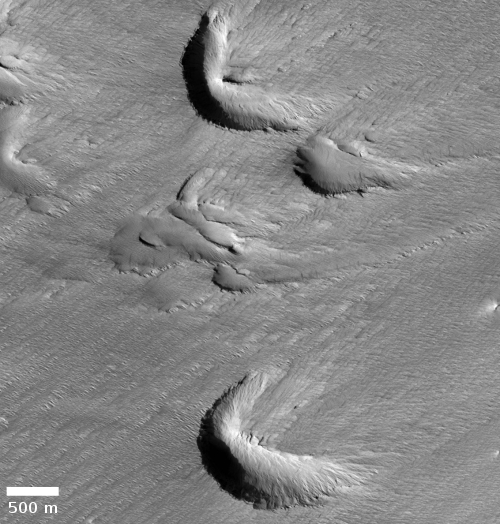 Cool image time! The image to the right, cropped and reduced to post here, was photographed by the high resolution camera on Mars Reconnaissance Orbiter (MRO) on August 5, 2020. It shows a cluster of the crescent-shaped gullies, apparently carved from desert sand by the prevailing winds.

Those prevailing winds here are from the southwest to the northeast. As the wind blows the sand to the east, it hits a more solid object, such as a mountain buried in the sand, which forces the wind and the blown sand to go around, much as water passes a boulder in river rapids. That solid object also causes an eddy to form at its face, the wind forced downward and then around and up, carving out the gullies by lifting the sand at the base of that solid object. The result are these crescent gullies, dubbed blow-outs.

The overview map helps explain why there is so much sand here, enough apparently to bury whole mountains.

The white box near the center of the map indicates the location of this image. It is in the middle of the Medusae Fossae Formation, the largest ash deposit on Mars, about the size of India and many feet deep. Laid down in many layers over almost a billion years from 3 to 4 billion years ago, this ash field is also thought to be the source of much Mars’ dust and sand.

A survey of all nearby MRO high resolution images finds a lot of these crescent-shaped gullies, all located on the eastern slope of a large 650-mile-long north-south ridge dubbed Eumenides Dorsum and oriented in approximately the same way. My guess is that the temperature differences between the top and bottom of this ridge causes the wind to flow its slopes, thus creating these blow-outs.