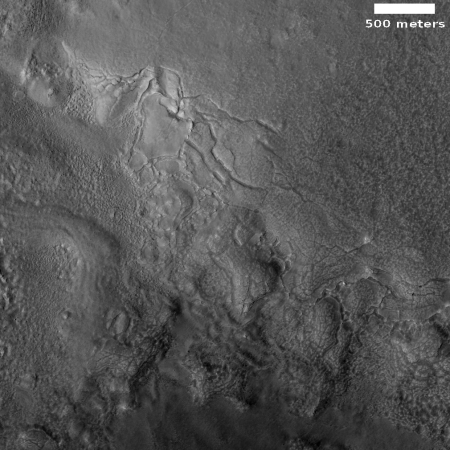 Cool image time! The photograph to the right, cropped and reduced to post here, was taken by the high resolution camera on Mars Reconnaissance Orbiter on December 22, 2019 and was titled “Contact Between Debris Apron and Upper Plains in Deuteronilus Mensae”.

The section of the full image that I have focused on shows what appears to be the downhill break-up of the surface debris covering an underlying water ice glacier. The grade is downhill to the south.

I am confident that this is buried glacial material based on recent research:

Both of these reports found lots of evidence of shallow ice in Deuteronilus Mensae, a region of chaos terrain in the transition zone between the Martian northern lowlands and the southern highlands.

With this image we see what appears to be the slippage of that ice downslope, causing breakage and cracks on the surface, with much of that surface made up of the dust and debris that covers the ice and protects it. Towards the bottom of the image it even appears that the disappearing ice is unveiling the existence of a bunch of buried bedrock mesas, typical of chaos terrain, previously hidden by the ice because it filled the surrounding canyons.

Below is a close-up of the photograph’s most interesting area of break-up. 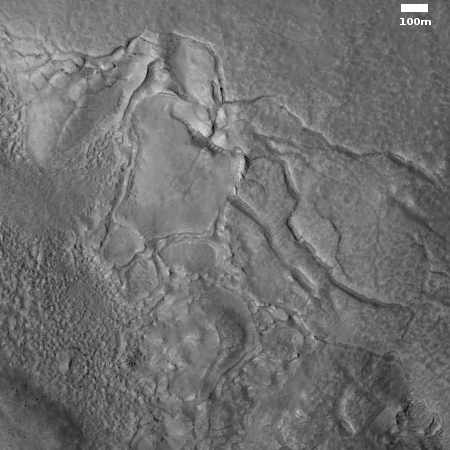 The cracked sections here are very reminiscent of similar glacial break-ups here on Earth, except here the underlying material is not liquid water but solid ground.

Is this glacier active? Very unlikely. It was growing in the past, when Mars’ inclination was much higher that today’s 25 degrees (comparable to Earth). When that inclination was 50 degrees, the poles were warmer than the mid-latitudes where Deuteronilus Mensae is located. Water would sublimate into the atmosphere at the poles and fall as snow here. That snowfall would cause the glacier to slowly flow downhill, which would result in this cracking at the glacier’s foot.