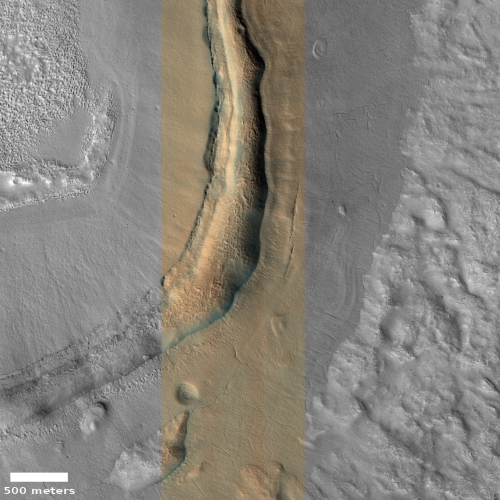 Today’s cool image on the right, rotated, cropped, and reduced to post here, is part of a series of cool images that have repeatedly shown the blobby and squishy look of crater impact sites in the Martian northern lowland plain dubbed Utopia Planitia. Taken on January 2, 2021 by the high resolution camera on Mars Reconnaissance Orbiter (MRO), it shows the southeast rim of a very distorted crater that appears filled with glacial material and is also surrounded by an apron of smooth material.

At 42 degrees north latitude, it is somewhat expected to find evidence of glacial-like features in such a crater. Moreover, throughout the 30 to 60 degree mid-latitude band in Utopia Planitia are found numerous such blobby craters (other examples found here, here, and here), all suggesting that the impact occurred on a flat plain with a layer of water ice close to the surface. The heat of the impact melted that ice layer. In such a circumstance, the crater rims were easily deformed because as liquid water (for a short time) it could flow into any number of shapes.

At least that’s my theory. According to Colin Dundas of the U.S. Geological Survey’s Astrogeology Science Center in Arizona,

The exact processes that create the patterns are still debated. The flattened/degraded rims are not necessarily related to this morphology, as such craters can have sharp rims, so they may relate to post-impact modification.

In other words, later erosion after the crater formed could have rounded the rim and maybe even distorted it from a circle.

Regardless, the processes that made this crater rim look as it does were clearly widespread, as shown in the wider view below, provided by the context camera on MRO. 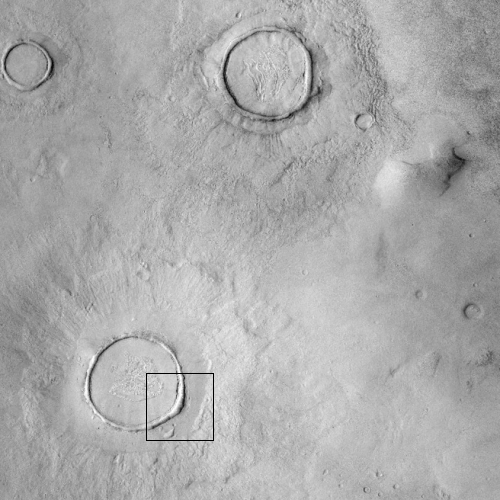 The black box indicates the area shown in the first photo. As you can see, the surrounding craters all look the same, blobby and filled with glacial-like features.

All also have aprons, suggesting that the heat of impact also melted and smoothed the rough surface of the surrounding terrain as that melted material flowed away but then quickly refroze.

Below is a global map of Mars taken from a presentation [pdf] from this year’s now on-going Lunar and Planetary conference that I have adapted and annotated. The white dot north of the Mensae Glacial Country marks the location of these craters.

The labeled regions all appear to be home to high concentrations of many surface glacial features. This crater, north of one such region, suggests (as do the many other such blobby features in these northern plains) that as you move away from the equator beyond the glacial zone you will find just below the surface a sheet of water ice. 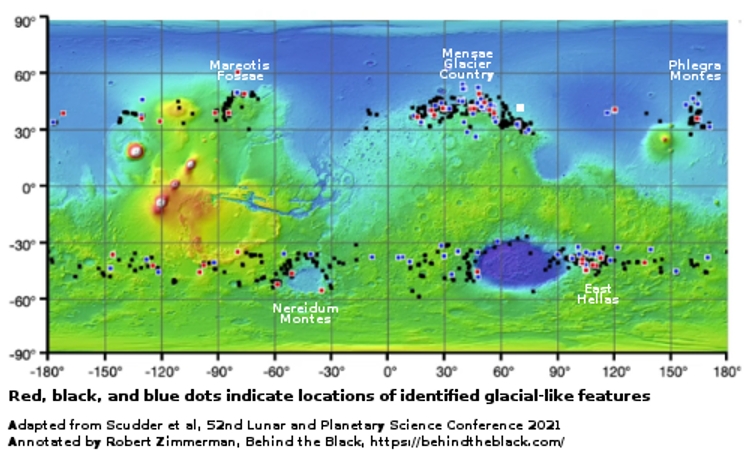 What all this data is also suggests is that the glacial bands from 30 to 60 degree latitude are signaling the fading away of this ice sheet from the cold icy polar regions to the arid and now very dry equatorial regions.

The ground-penetrating radar on the Chinese rover due to land in Utopia Planitia at 24 degrees latitude in a few months will help confirm this supposition. If it finds no subsurface ice, then it will substantiate the evidence that suggests the ice layer fades at around 30 degrees latitude.

However, if it detects any ice layer at this lower latitude, it will tell us that even at low latitudes ice can be found on Mars, merely by drilling down into the ground.

The next question will then be to find out if that ice layer extends even closer to the equator, and if it even reaches it in some places. If so, those locations would be valuable real estate to future colonists.