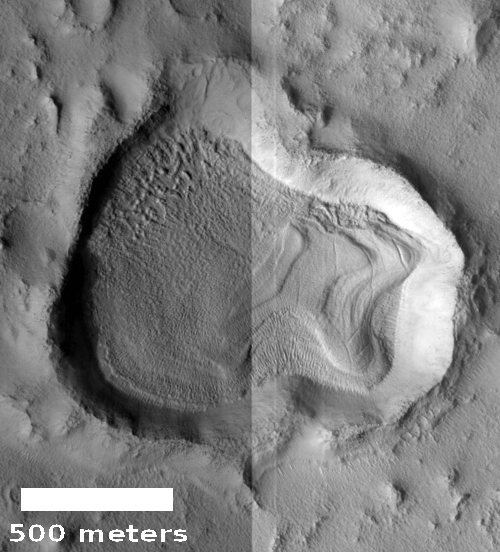 Cool image time! The photo to the right, rotated and cropped to post here, was taken by the high resolution camera on Mars Reconnaissance Orbiter (MRO) on May 25, 2020. The entire image was dubbed “Cluster of Filled Craters”, but I decided to highlight the crater of the cluster that was most strangely distorted of them all. The material that fills all the craters in the full image is almost certainly buried ice and is dubbed concentric crater fill by scientists.

This crater is located in the northern lowland plains the mid-latitudes between 30 and 60 degrees, where planetary scientists have found ample evidence of many such filled craters and glaciers.

Not only does the crater’s interior seemed filled with glacial material, its distorted rim suggests that it has been reshaped by glacial activity that might have covered it entirely over the eons as the mid-latitude glaciers of Mars waxed and waned with the extreme shifts that happen regularly to Mars’ rotational tilt. Moreover, there is strong evidence that in these lowland northern plains an underground ice table exists close to the surface, allowing for more distortion over time.

The overview map below provides some location context. 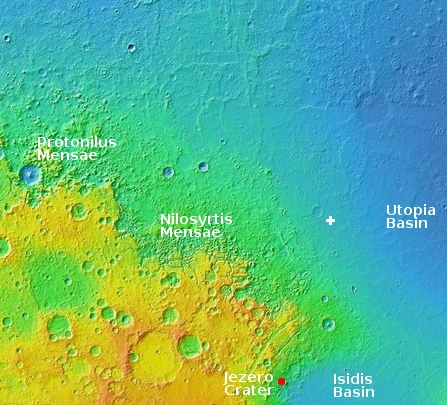 The white cross indicates the location in Utopia Basin of this crater image. I have posted numerous images showing similar squishy features in Utopia. This plain is also the prime landing site in 2021 for China’s rover from its Tianwen-1 mission, now on its way to Mars. That rover will likely land to the east, just beyond the right edge of this map.

The two mensae regions, Protonilus and Nilosyrtis, to the west and in the same glacial latitude bands, are regions I call glacier country, because numerous glaciers appear to exist on almost all the slopes of the numerous canyons and mesas and buttes of this chaos terrain.

Jezero Crater is the targeted landing site for the Perseverance rover, set to land February 18, 2021. Jezero is about 18 degrees north latitude, which puts it well south of the northern hemisphere’s glacial band. Nonetheless, the strange delta flow into the crater that caused scientists to pick this landing site suggests some sort of liquid or mud flow.

Increasingly the evidence points to Mars as being a place with a lot of frozen water, with much of it apparently very close to the surface, if not on the surface and only protected by a thin layer of debris.