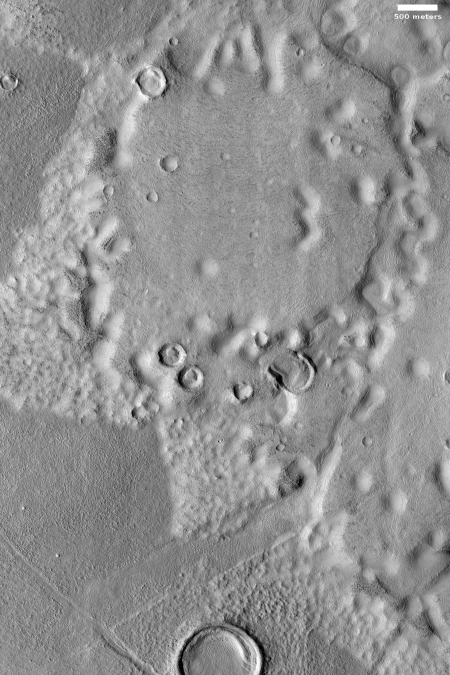 Cool image time! Rather than talk about shut downs, lying politicians, and our tragically fear-filled society, let’s go exploring on Mars. The image to the right, rotated, cropped, and reduced to post here, was taken by the high resolution camera on Mars Reconnaissance Orbiter (MRO) on February 8, 2020. Dubbed a “Flow-Like Feature within the Adamas Labyrinthus”, it shows what appears to be a very distorted and eroded pedestal crater surrounded by strange triangular-shaped flow features.

It also shows, as does much other research, that the northern mid-latitudes of Mars have a lot of frozen water, much of it buried very close to the surface.

Assuming this is a pedestal crater (which it might not be), this feature has to be very old. Pedestal craters require age, as to stand out above the surrounding terrain a lot of time is needed to erode that terrain away. This age is confirmed by the bunch of newer craters on top.

At the same time, the partially filled small crater near its bottom, as well as the soft eroded depressions on top, suggest that much of this surface has been reshaped by more recent flows, changing its shape over time.

The surrounding triangular flows probably occurred at the original impact, and suggest that there is ice near the surface, making the material here act almost like wet mud when heated. Since this location is right in the middle of the mid-latitude bands where scientists have found lots of evidence of buried glaciers and ice near the surface, this supposition seems reasonable. 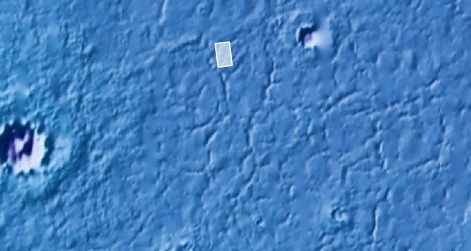 The first map to the right shows where this flow is located generally on Mars, with this weird flow indicated by the white cross near the right edge. The other two white crosses refer to two other cool images previously posted, showing some giant scallops and a weird glacier-filled crater. The red dot indicates the location of a mesa with many glaciers flowing off its cliffs.

The second map, zooming in on the area surrounding this flow, illustrates the reason why the name “Adama Labyrinthus” is given for this region. The flow is amidst a complex array of canyons and fissures, resembling chaos terrain but more likely related to the polygon structures found frequently in the northern lowlands of Utopia Planitia. As I wrote at this link,

On Earth these polygons are most often seen in mud, usually suggesting a drying process where the ground contracts with the lose of fluid. On Mars the cracks probably also form from contraction, but not by the lose of fluid but the lose of water ice as it sublimates into a gas.

All these features once again illustrate the large variety of peculiar and intriguing geology that must be hidden in the northern lowland plains, that on a global scale appears relatively flat and featureless. We have gotten a close look at only a tiny percentage of these northern lowlands. The discoveries still unseen there must be legion.