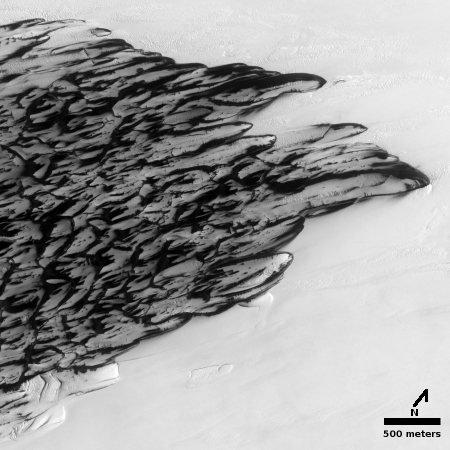 Cool image time! The photo to the right, cropped and reduced to post here, was taken by the high resolution camera of Mars Reconnaissance Orbiter (MRO) on September 15, 2019, right at the beginning of summer at the north polar icecap of Mars.

Without a larger context it is very difficult to figure out what this image shows. The image title, “Seasonal Changes of Chasma Boreale Megadunes,” gives us some basic clues. The streaks of black and dark grey are giant dunes, with this image showing their trailing edge. The darkest streaks are likely places where the thin winter mantle of dry ice has begun to sublimate away with the coming of spring, exposing the darker sand dunes below. The surrounding flat white areas are either the permanent water ice of the icecap or the surface of the lowland northern plains that surround that icecap.

The montage below shows a series of monitoring photos, beginning in 2018 during the last Martian summer and continuing through the start and middle of the spring and ending with the photo above. It shows the seasonal evolution of that upper carbon dioxide dry ice mantle, which reveals the darker dunes below as that dry ice mantle sublimates away. 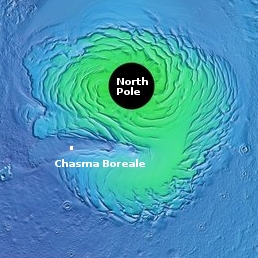 The location of these dunes is in itself intriguing. The white box on the map to the right shows their location, near the entrance to the giant polar canyon Chasma Boreale, 350 miles long with a width of about 75 miles at its beginning. The surrounding cliff walls rise around a mile on each side, giving scientists a glimpse into the many layers of the Martian water icecap.

These dunes appear to be marching out of the canyon, blown by the prevailing winds that are tunneled into Chasma Boreale as they blow off the cold surrounding icecap. Yet, if you look closely at the different images of the dunes, you will see that, except for the sublimating dry ice mantle, the leading edge of the dunes themselves show little change. While they have clearly moved as indicated sometime in the past, right now they are probably either cemented or crusted so that the thin Martian atmosphere does little to change them. 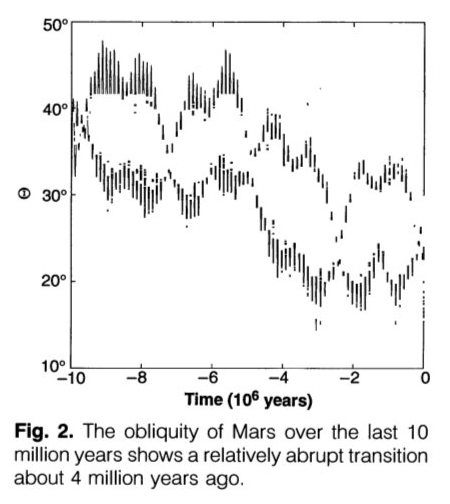 That is the situation today, when the planet’s inclination is similar to Earth’s, tilting about 25 degrees. Unlike the Earth, however, the inclination of Mars goes through large swings [pdf], from 0 degrees to as much as 60 degrees.

When that axial tilt was about 50 degrees (about 4 million years ago), as shown in the graph to the right, taken from the linked paper, the coldest parts of the planet were in the mid-latitudes and the polar regions were warmer. During that time period it is theorized that the water of Mars was shifting from the poles to the mid-latitudes, creating the buried glaciers we see today in those mid-latitudes.

During those earlier times these dunes could have also warmed enough to loosen and for the wind to move them, thus shaping them as we see them now.