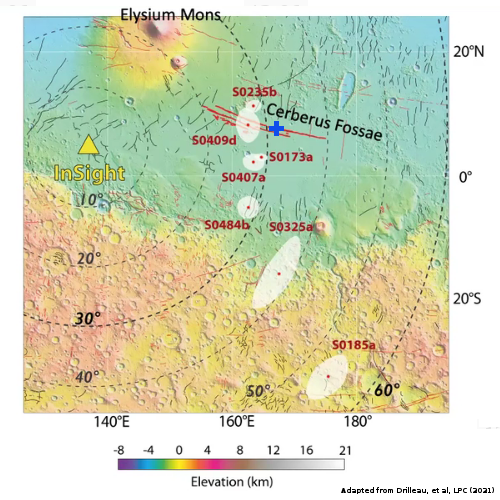 Using Mars Reconnaissance Orbiter (MRO) images scientists now believe they have located a volcanic eruption on Mars that could have erupted violently as recently as only 50,000 years ago, and is located deep within Mars’ volcano country. The overview map to the right indicates the location of this volcanic with the blue cross. The red dots surrounded by white ovals are distinct quakes that InSight has detected. From their paper’s abstract:

Stratigraphic relationships indicate a relative age younger than the surrounding volcanic plains and the [nearby] Zunil impact crater (~0.1–1 [million years]), with crater counting suggesting that the deposit has an absolute model age of 53 ± 7 to 210 ± 12 [thousand years]. This young age implies that if this deposit is volcanic then the Cerberus Fossae region may not be extinct and that Mars may still be volcanically active. This interpretation is consistent with the identification of seismicity in this region by the [InSight] lander, and has additional implications for astrobiology.

The Cerberus Fossae region is a series of long fissures that scientists think were created when the underground magma pushed up, stretched the surface, and thus caused it to crack. This particular feature suggests that when the ground cracked it sometimes also did so in conjunction with a volcanic eruption.

Below is a zoomed-in context mosaic, taken from figure 1 of the above paper, showing the feature itself and the surrounding terrain. 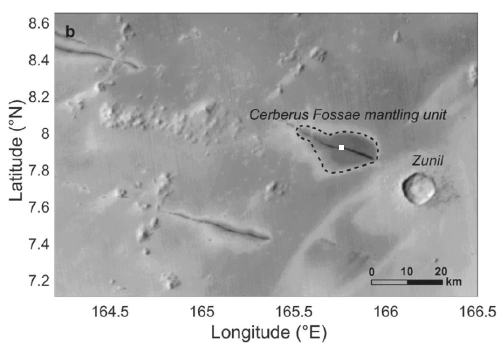 This volcanic feature is apparently an 18-mile-long fissure from which spewed material that now darkens the ground to the north and south. After careful comparison of this symmetrical dark feature with other dark wind-caused streaks in this region, the scientists concluded that it was not caused by wind, but is the remains of a relatively recent volcanic eruption that laid down a thin layer of material only about one foot thick. As noted by lead author David Horvath of the Planetary Science Institute in the press release:

“This feature is a mysterious dark deposit, covering an area slightly larger than Washington D.C. It has a high thermal inertia, includes high‑calcium pyroxene-rich material, and is distributed symmetrically around a segment of the Cerberus Fossae fissure system in Elysium Planitia, atypical of aeolian, or wind-driven, deposits in the region. This feature is similar to dark spots on the Moon and Mercury suggested to be explosive volcanic eruptions,” Horvath said. “This may be the youngest volcanic deposit yet documented on Mars. If we were to compress Mars geologic history into a single day, this would have occurred in the very last second.” 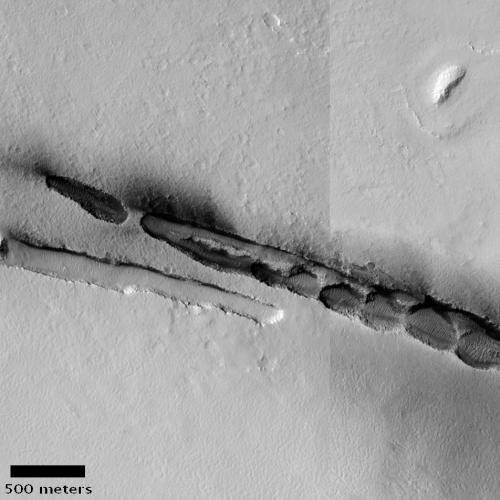 The second image to the right, created from two MRO high resolution photos, shows the center point of this volcanic fissure with its location indicated by the white dot in figure one above. The circular features are only found in this part of the fissure, where there is also less of the surrounding dark mantle. Their circular shape suggests to my uneducated mind that they might be the launch points for individual eruptive events, but that is a pure guess.

If the scientists’ hypothesis is correct, this volcanic feature is significantly younger than what has previously been thought to be the youngest volcanic feature on Mars, the Athabasca flood plain, which is thought to have occurred in a period of only a few weeks about 600 million years ago out of nearby other cracks in Cerberus Fossae. As Horvath explained to me, “It seems that young volcanism in this region effectively utilized the Cerberus fissure system as a conduit to reach the surface.”

More important, that this feature might be only 50,000 years old and is also located in the same region InSight has detected quake activity suggests that Mars might still have some active volcanism. It suggests that we might someday even see an eruption actually occur.