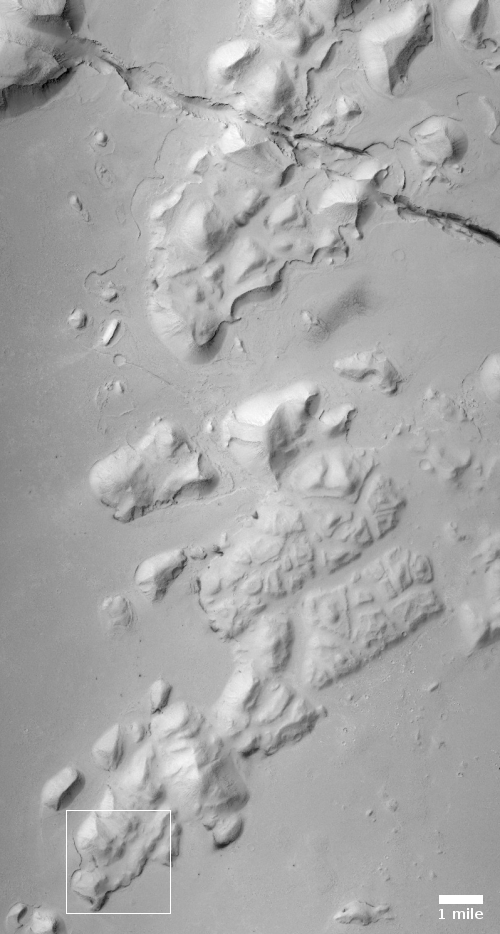 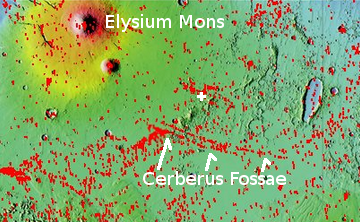 Today’s cool image to the right, rotated, cropped, and reduced to post here, was taken in January 2012 by the context camera of Mars Reconnaissance Orbiter (MRO). The location is a small section of the Tartarus mountain range that is cut by the Cerberus Fossae fissures, all located in Elysium Planitia, the large volcanic lava plain that lies between Mars’ big volcanoes. The white cross on the overview map below marks the location of the photo.

I picked this photo because it quickly shows us in one picture many of the typical features one finds in that lava plain.

For example, the distinct fissure that cuts across the mountains near the top of the picture is the northernmost large fissure of Cerberus Fossae. In my initial post on Cerberus I mistaken thought its large and many hundreds of miles-long fissures might be evidence of underground lava tubes. Since then I have learned while the depressions may signal underground voids, they are not a lava tubes but graben, cracks formed by the movement of the terrain on each side. The cracks opened when past volcanic activity caused the ground to swell upward, stretching and splitting it.

The dark splotch in the flat area just south of the fissure remains me of the maculae found in these lava plains to the west of Olympus Mons, splotches that for still undetermined reasons dust devils like to congregate, blowing off the red dust so that the dark basalt lava becomes visible. No high resolution image of this spot has yet been taken, so this is a pure guess on my part.

The mountains near the bottom of the photo illustrate the ancient lava flood that inundated these mountain peaks. The white box shows the area covered by the recent MRO high resolution image that I include below. 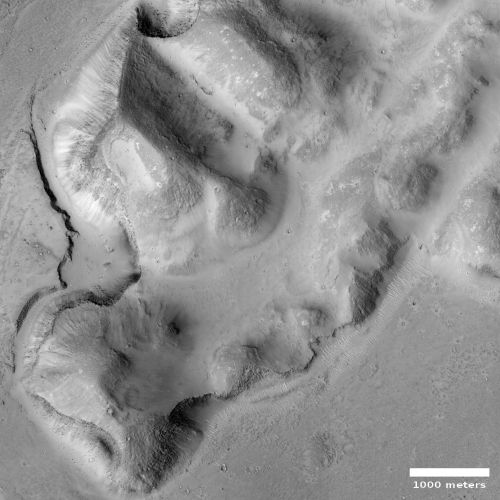 This photo was taken on November 2, 2021. While at first glance the material that skirts up against the mountain could be construed as glacial, it is instead frozen lava that has begun to erode over the eons and thus separate from the mountain slopes. There is likely no ice close to the surface here, as these mountains are at 14 degrees north latitude, in the dry equatorial regions.

Whether these peaks were themselves volcanoes or not, it is evident that the lava plains that surround them appear to have mostly buried them.

There was once a lot of volcanic activity on Mars, enough to coat as much as one third of the planet in thick lava, in many layers. Those eruptions also produced the planet’s vast and thick volcanic ash fields that produce the dust that covers the planet.

Any theory trying to outline the long-term climate history of Mars must include that volcanic activity. For long periods on Mars it was volcanism that dominated, changing the atmosphere, the climate, and the surface.