Monitoring the ice scarps on Mars for changes
April 4, 2019 at 1:30 pm Robert Zimmerman Points of Information 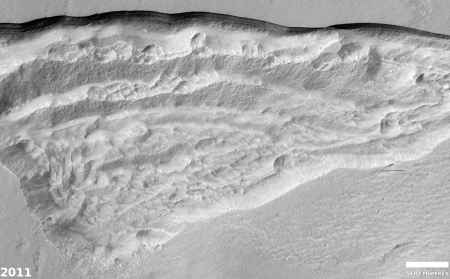 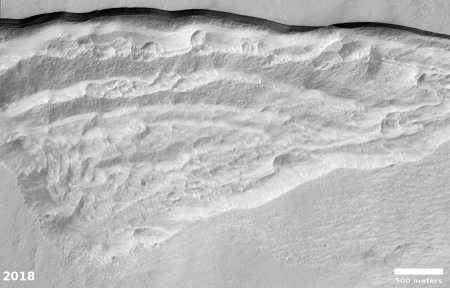 Back in January 2018 planetary scientists released a paper announcing the discovery of a number of Martian cliff faces, or scarps as they called them, that all appeared to expose an underground layer of ice.

Those cliffs were mostly located to the southeast of Hellas Basin, the basement of Mars that is also advantageous for human colonization because its lower elevation means its atmosphere is thicker. (For example, that thicker atmosphere would make air transportation more practical.)

The two images to the right show what they listed as scarp #1 in their paper, rotated, cropped, and reduced to post here. The first image was taken in May 2011, with the second taken in December 2018, and was part of the March image release from the high resolution camera of Mars Reconnaissance Orbiter (MRO).

The December 2018 image was taken almost a year after the paper release, and was titled “Scarp Monitoring.” I therefore wondered whether the scientists had identified any changes. They theorize that these scarps form when the exposed ice slowly sublimates to gas into the atmosphere, causing the cliff face to collapse and retreat, which in the case of scarp #1 would be a retreat to the north. The terraces below the scarp suggest previous cliff locations. In their paper they noted evidence of some changes in the studied scarps, including some fallen boulders, as well as color changes that suggest some evolution.

The rate of that retreat is not known with precision, but based on the facts presently at hand, the scientists have estimated that it took about a million years to form this scarp. Whether any evidence of this retreat would be visible in only seven years is the purpose of these scarp monitoring images.

Do you see any difference? I don’t, but because I also don’t trust my expertise I decided to email the paper’s lead author, Colin Dundas of the U.S. Geological Survey’s Astrogeology Science Center. His emailed comments are most interesting.

I haven’t yet analyzed the most recent data … but some of the mottled color/albedo changes that we mentioned in the paper were at this scarp, so you might wish to say something like “no major changes”. For context, we expect exposed ice to slowly sublimate and be covered by dust.

He then confirmed that this slow sublimation would be below the resolution of the high resolution camera of MRO, and thus would likely not be visible in these images. The changes in color as well as the periodic fall of boulders however both suggest this is the process that is happening. As he added,

It could be many years before we see changes at [the scale of this camera], but the color and albedo may be changing as thin dust lags form and are swept away.

Thus, some changes should eventually become visible, but to spot them will take time.

Monitoring these scraps will be crucial for future exploration. The ice here is very readily available, as it is exposed and should be relatively easy to access. Moreover, tracking might tell us whether it will be easier to get at this ice from the top of the cliff by drilling down, or approach it from the bottom. Some of the ice bands in these scarps was very close to the surface at the top of the cliff.