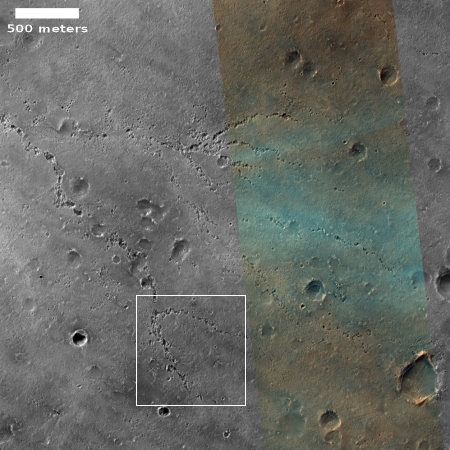 Cool image time! As my regular readers well know, I am a caver, and am thus always interested when the high resolution camera on Mars Reconnaissance Orbiter (MRO) takes a close-up of a pit that might also be an entrance to a cave.

The photo to the right, cropped and reduced to post here, was part of the most recent image release from MRO, but was boringly labeled “Arabia Terra” after the region where it is located, one of the largest transition zones on Mars between the northern lowland plains and the southern cratered highlands. When I took a close look, what I found was an intriguing string of pits whose arrangement is strikingly reminiscent of a river tributary system.

The white box indicates one section that I have zoomed into, as shown below. 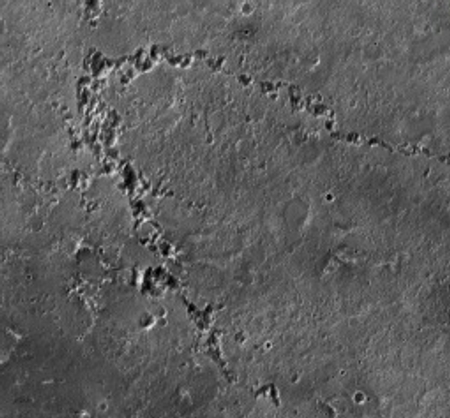 Gosh, that sure looks like there was an underground drainage, flowing from the right to the left, with two tributaries coming to a confluence that on the wider image above continues to the north and west until it combines with another set of tributaries and then heads west. Whatever had flowed underground had eventually eroded a large enough passage for the ceiling to collapse in multiple places along its length.

Of course, we have no idea if these pits are skylights into a volcanic lava tube, or a former water passage. The low latitude, only 5 degrees north of the equator, argues against liquid water, but then, this is also the same latitude as the giant canyon Valles Marineris, which scientists think might have been formed by catastrophic floods.

The implied direction of the underground drainage, to the west, also makes sense. The general downward grade for Arabia Terra is to the west and north.

Finally, the color strip in the top photo provides one more intriguing detail. The ground surrounding one string of pits is differently colored than the surrounding terrain, suggesting a different make-up. To my eye this looks like dust material that might have been blown from the pits, but that’s a pure guess.

Is there a cave system here? We do not know, though other research supports this hypothesis.