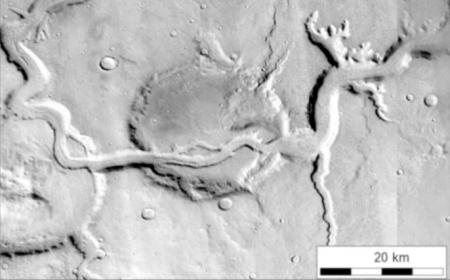 More caves on Mars! This week the Lunar and Planetary Institute and the Johnson Space Center are jointly holding the 50th Lunar and Planetary Science Conference in Texas. I have been going over the program, and will be posting reviews of some of the more interesting results all this week.

We begin with caves, which should not be surprising to my regular readers. As a caver who also knows their value for future space colonists, I am always attracted to new discoveries of cave passages on other worlds. Today’s however is a doozy.

The image to the right is of Mamers Valles on Mars, what scientists have dubbed a fretted valley, a common feature in the transition zone between the low altitude northern plains and the southern highlands. It comes from a paper [pdf] with the typically unexciting scientific title, “Fretted channels and closed depressions in northern Arabia Terra, Mars: Origins and implications for subsurface hydrologic activity.”

What the scientists really means here is that their research strongly suggests that Mars has a very large and very extensive number of underground drainage systems, which have caused collapses on the surface that often resemble meandering river canyons, such as seen above. As they explain:

Specific analysis of the largest fretted channel, Mamers Valles, reveals that the main channel floor incises into local topographic highs that should otherwise divert fluvial flow and prevent channel formation. Additionally, fracture patterns and slumping within the channel walls are observable at multiple points down-channel, suggesting removal of substrate support of the caprock unit. These observations, in conjunction with the paucity of effluent material near the Mamers channel mouth, support the interpretation that subsurface rather than surface flow is a major component of channel formation, producing fracturing of overlying plateau material and minimal observable sediment transport.

…Based on these morphologic observations, the fretted channels and closed depressions both appear to be inconsistent with formation through overland flow. Instead, the observed morphologies are interpreted to indicate a significant component of subsurface removal of material, based on (1) channel formation irrespective of surface topography, (2) pervasive evidence of collapse in both the fretted channels and closed depressions, (3) extended slumping of topography beyond the observed channel/depression cavities, and (4) the massive volumes of missing material required to produce the observed cavity volumes. [emphasis mine]

In other words, the meandering channel exists because such a meandering channel had existed underground, and as it formed and aged it caused the surface to sag or collapse above it. Much of that evolution the scientists theorized came from the melting of ice or snow.

From these observations, we consider five potential options for formation of the fretted channels and closed depressions capable of producing regional drainage and collapse: (1) sublimation/melting of a laterally extensive ice-cemented cryosphere, (2) sublimation/melting of lenses of buried snow and ice, (3) circulation and release of a liquid groundwater reservoir, (4) dissolution of highly soluble minerals (e.g., magnesium sulfates) and (5) some combination of the above.

They theorize that the melting was caused by heating from local volcanic events, of which there is ample evidence on Mars.

This conclusion has incredible implications for both Martian geology and future colonization. First, it could very well solve one of the biggest mysteries of Martian geology: The present surface geology suggests that a lot of liquid water once flowed on the surface, yet scientists have as yet not been able to figure out — based on what they know of Mars’s gravity and atmosphere either now and in the past — how this could have been possible. Mars was generally too cold or its atmosphere was too thin for liquid water to flow.

But what if a lot of that liquid flow was below the surface, in the ice table that other evidence suggests exists underground across much of the Martian surface? This in turn could explain a lot of the surface features on Mars, which we humans have assumed formed from surface flows, based on our Earth-based experience. Instead, maybe those Martian flows did not mirror what we would expect, but were instead Martian drainage systems underground and of a very alien design than what we are used to seeing. Earth for example has underground water drainage systems, most typically expressed in large cave systems. These however are rarely if never large enough to express themselves so obviously on the surface. On Mars however this might be very different.

The second important implication of this finding, and the one that is possibly more important, is that this research suggests that there are many many many underground voids on Mars, formed by water, that could be found in many places. Some might be easily accessible. Some might require drilling into. In either case, they would provide ample locations for building habitable colonies.

And they would likely still have that water, now frozen into the underground ice table.

The possibilities are mind-boggling. They suggest that everyone studying Mars must rethink the surface features. The alienness of Mars means they might resemble Earth geology, but might have formed in ways we have not previously imagined. And the consequences of that alien formation might make future human colonization far easier.