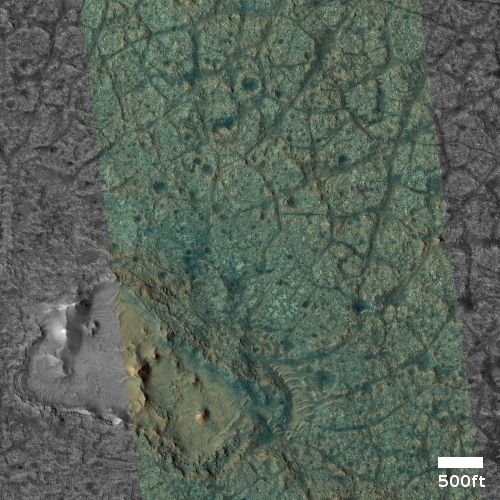 Cool image time! The photo to the right, cropped to post here, was taken on February 26, 2021 by the high resolution camera on Mars Reconnaissance Orbiter (MRO) of a small section of the floor of 85-mile-wide Galilaei Crater.

The main focus of the image is the polygonal cracks that cover the flat low areas of the crater floor, interspersed randomly by small mesas and shallow irregular depressions. The depression in this particular image is especially intriguing. It to me falls into my “What the heck?!” category, for I can’t imagine why among this terrain of polygons and pointed mesas there should suddenly be an irregularly shaped flat depression with a completely smooth floor that has no cracks at all.

The polygons are less puzzling. Galilaei Crater is very old, its impact thought to have occurred about 4 billion years ago. Though it sits at 5 degrees north latitude, practically on the Martian equator and thus in what is now Mars’ most arid region, scientists believe that once there was a lot of liquid surface water here. The overview map below illustrates this. 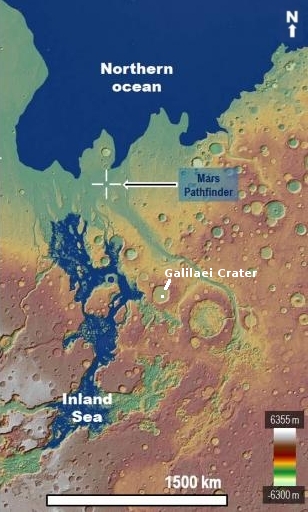 This map, annotated slightly to post here, comes from figure 3 in a 2019 paper that proposed, based on existing data and simulations, that once catastrophic floods had burst forth from the giant canyon Valles Marineris to the west to form the intermittent oceans shown on the map. The white dot in Galilaei Crater marks the location of today’s image.

When this region was wet, the floor of Galilaei Crater was likely also wet, with its own short-lived lake. When that lake dried away, the cracks formed. As explained in an 2010 paper,

We propose desiccation to be a dominant mechanism for the formation of Crater Floor Polygons without ruling out thermal contraction as a possible contributor in some cases. This implies that lakes or water-rich sediments occupied the craters in the past.

On Earth such polygons are frequently seen in mud flats after the water has evaporated away. The mud as it dries contracts, and cracks to form the polygons.

The greenish-blue color of the terrain in the color strip suggests [pdf] a coarse material of sand or rocks, though I am not certain this is entirely correct. The tiny mesas in the depression are light reddish and tan, suggesting those mesas are covered by dust and fine-grained sand. Why the polygons and the floor of the depression have little dust (assuming my interpretation of the colors is correct) while the surrounding flats do not is most baffling.