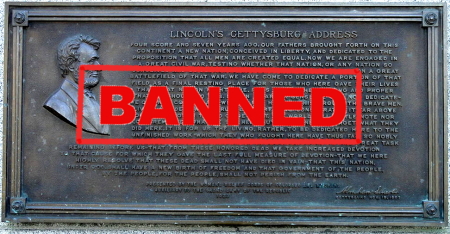 Our modern dark age: Faced with a storm of criticism from donors, alumni, and the public, the removal of a bust of Abraham Lincoln from the library at Cornell University, has been cancelled, and Lincoln will once again be given an honored place at the university.

The bust’s removal, along with a plaque celebrating Lincoln’s Gettysburg address (to the right), were removed in 2021 because some unnamed individual had filed a complaint. As I noted in June:

——————–
Why should this “temporary” display be suddenly removed in 2021 after being on display for almost a decade? Well, in 2020 and 2021 a lot of people at Cornell were loudly complaining about America, its history, and its fundamental principles. During that period the president of Cornell’s Republican club was harassed and physically attacked, the college ran numerous classes that excluded men or whites, students assembled “safety teams” to prevent students from attending a law professor’s lecture on free speech while campaigning to get that professor fired, and the student assembly demanded that one building be renamed because the man it presently honors had recommended war with the Philippine Islands during the McKinley administration in 1899.

In 2020 students also circulated a petition supporting the goals of the Black Lives Matter movement, with many bigoted demands.

It doesn’t take a rocket scientist to put two and two together here. The 2021 complaint was almost certainly connected with these anti-American and bigoted BLM protests, which cannot tolerate any positive reference to any great American hero, such as Abraham Lincoln. The agenda of BLM, which claims all whites are racist and evil, as is all of American history, would be proven to be an utter lie if others could read Lincoln’s Gettysburg Address. Such knowledge must be censored.

Some jack-booted thug from this totalitarian BLM movement then complained, and Cornell officials in cowardice immediately bowed in submission. Lincoln and the Gettysburg address were thus cancelled.
——————–

Well, it appears the outcry from the public as well as many Cornell alumni and donors over this stupid cowardice actually had an impact.

Elaine Westbrooks, the Carl A. Kroch university librarian at Cornell, said in a statement Thursday the bust of America’s 16th president is slated to soon be placed where it originally debuted — the school’s Uris Library when it opened in 1891.

“Over the summer, I directed the cleaning and return to public exhibition of a bust of Abraham Lincoln, a valuable item in the Cornell Library’s vast permanent collection,” she said in a written statement provided to The College Fix. “The bust will soon return to its original room in Uris in the heart of our Ithaca campus.”

Westbrooks was tapped as librarian in March 2022, roughly seven months after the bust was removed from the Rare and Manuscript Collections section of Kroch Library. The bust had been displayed there in front of a decal plaque of the Gettysburg Address since 2013.

The most astonishing aspect of Westbrooks’ decision is that it appears that Cornell has actually hired as its new librarian a rare academic in this day and age who is not a coward and is willing to stand up bravely to the leftist goons who now dominate college campuses. Even more astonishing, she is conversant with American history and recognizes its greatness. She not only supervised the return of Lincoln to public display, the new display will be even more visible and prominent, in the main library rather than in the rare manuscript collection.

It is not yet clear if the plaque of the Gettysburg address will also be restored to public view. This is less critical, though it would be appropriate if the full address was still quoted in the displayed material surrounding the bust. The address makes it very clear where Lincoln stood on freedom, on slavery, on representative government, and on the brutal Civil War that was raging in 1863, when Lincoln gave this speech. Its public display will do much to put the lie to the racist and Marxist “Diversity, Inclusion, and Equity” movement that is trying to discredit all American history and make whites second class citizens.