Sharp Martian ridges sticking up from the dust 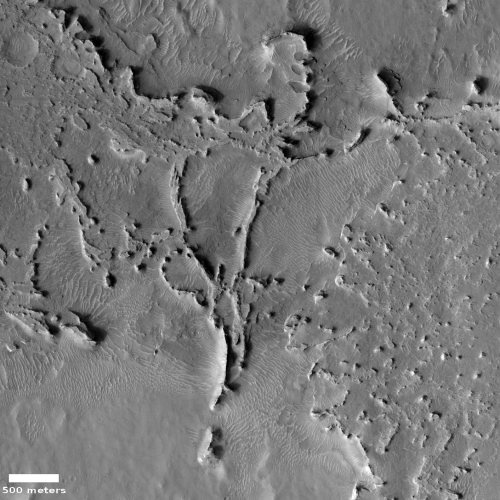 Today’s cool image brings us back to the region of Mars where the rover Opportunity journeyed. Taken on June 25, 2020 by the high resolution camera on Mars Reconnaissance orbiter (MRO), the photo to the right, cropped and reduced to post here, focuses on some sharp but low ridges that appear to stick up out of the Martian dust, hinting that they are the tops of some larger feature buried over the eons and only now revealed partly by recent erosion. I estimate that their height is roughly one to two hundred feet or so.

This image is in Arabia Terra, the widest and largest transitional zone region between the northern lowland plains and the southern cratered highlands. It is also only about 200 miles north of where Opportunity landed, and about 230 miles from where it died after almost fifteen years of operation, on the west rim of Endeavour Crater. The overview map below gives the context. 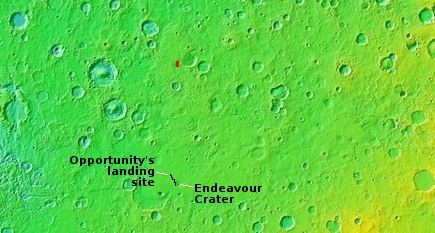 The red rectangle indicates the location of this image. The black squiggly line indicates the path that Opportunity took during its fifteen years on Mars, traveling to the southeast to reach the western rim of Endeavour.

This part of Arabia Terra seems somewhat boring from a distance, an endless vista of craters, with no major mountains or channels or canyons or anything big and spectacular. As is usually the case, that distant view gives an incorrect impression. On a human scale close-up, there is plenty of interesting stuff hidden among these craters. Opportunity during its journey illustrated this. So does the photo above.

We just have to get close enough. For example, the large faint crater just to the east of today’s photo is dubbed Vernal Crater. On its floor just inside its southern rim are features that some scientists believe are inactive hot springs. While the evidence is tenuous, the geology remains intriguing and tempting.

There is a lot of similar stuff surely hidden in this vast terrain. It only requires us to go and look to find it.