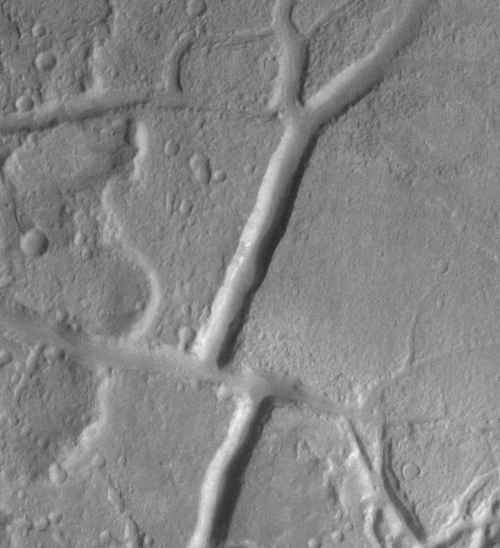 Today’s cool Martian image, rotated, cropped, and reduced to post here, comes from the camera on Mars Odyssey and was taken on May 18, 2020. It shows an area on Mars where faults and cracks in the ground have caused criss-crossing depressions. In this particular case we can see that the north-south trending fissure at some point got cut in half by east-west trending fault, its northern and southern halves thus getting shifted sideways from each other. For scale the straight section of the northern canyon is about five miles long, with the sideways shift about a mile in length.

As the caption notes, “With time and erosion this region of fault blocks will become chaos terrain,” regions of canyons often cutting at right angles to each other with flat-topped mesas and buttes in between.

Now for the mystery. 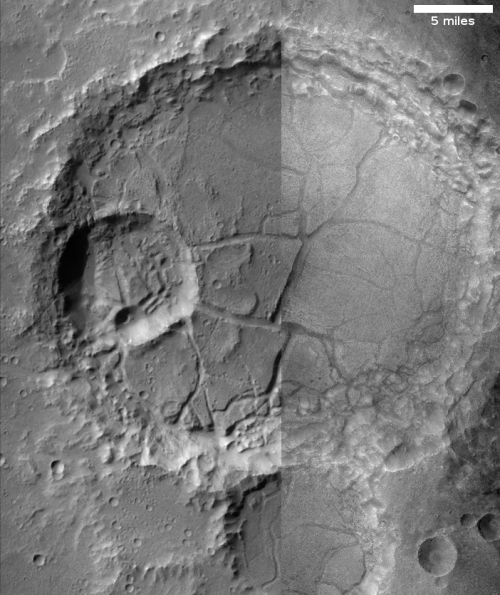 The wider photo to the right, also rotated, cropped, and reduced to post here, was created from two images taken by the context camera on Mars Reconnaissance Orbiter (MRO), and shows that the fissures in the first image above are actually in the floor of an unnamed crater about 26 miles in diameter, located in a region of the cratered southern highlands dubbed Margaritifer Terra and found just to the east of outlet of Valles Marineris.

Intuitively we immediately assume that when the impact occurred it shattered the underlying bedrock, creating the faults in the crater’s floor where erosion is now creating these depressions. Then at some point the east-west fault shifted, breaking the north-south fault in half.

As is always the case in science, however, assuming anything is dangerous. Note the rim of the crater. It is not shifted sideways as is the north-south fissure. This means that the shifting of these faults had to have occurred prior to the impact, which also means these faults, and the shift, already existed when the impact took place. They reveal a far earlier geological epoch that the impact appears to have subsequently exposed.

Note too how the depressions seem to meander like angular tributaries down from the crater’s rim. At some point something, either water or ice, flowed downward here, naturally favoring the low spots caused by the faults. The problem is that this crater is at 18 degrees south latitude, too close to the equator. At this latitude scientists have found little evidence of ice or water, with the terrain dry. The wider image illustrates this, the ground appearing to be shattered, dry and rocky.

All together this photograph suggests the following history. First, events occurred that caused the massive faulting. Later, another event — either instantaneous or slowly over time — caused the major sideways shift of the fault system. During this same time period erosion was widening the cracks where the faults were located. Then, erosion was replaced with deposition, and the fault system became buried.

Next, this spot was hit by a bolide which dug out the crater and exposed the fault system, at a time when this region was wetter and ice or water would flow down from the interior rim to the center of the crater, using that fault system for its drainage path.

Finally, the region dried out, the water/ice disappeared, and the floor of this crater and its faults were left to erode by wind, and wind only.

Nice theory, but I must always warn my readers that I am not a planetary geologist, I only play one on this website. I might make educated guesses, but my education is limited, and a little knowledge is a dangerous thing. I myself might be making many wrong assumptions about this geology.

It is fun, however, to wonder at the process that caused the floor of this crater to shift sideways by about a mile.