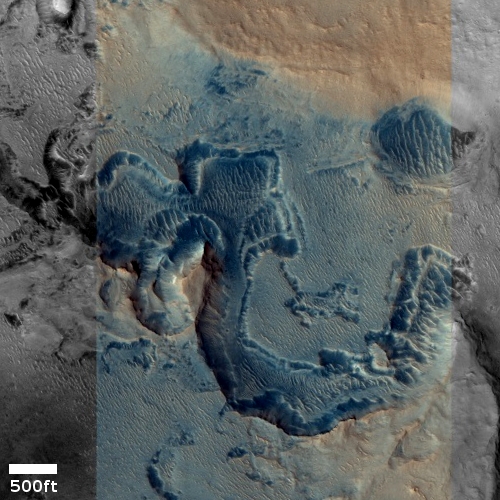 Cool image time! The photo to the right, rotated, cropped, and enhanced to post here, was taken by the high resolution camera on Mars Reconnaissance Orbiter (MRO) on October 4, 2020. It shows what appears to be features that are either corroding or eroding away, with the lower areas filled with rippling sand dunes.

The circular features might be ancient craters. The material that partly fills them might be a layer of dust or sand that the wind is slowly blowing away to dig out the depressions along the southern cliff wall.

According to the MRO science team’s interpretation of the colors produced by the high resolution camera [pdf], the dark blue colors here are likely “coarser-grained materials (sand and rocks)”, while the orange-red material on the higher terrain is likely dust.

Could this material be evidence of buried ice eroding away? At first I thought so, and then I took a look at the photo’s location, as shown in the overview image below. 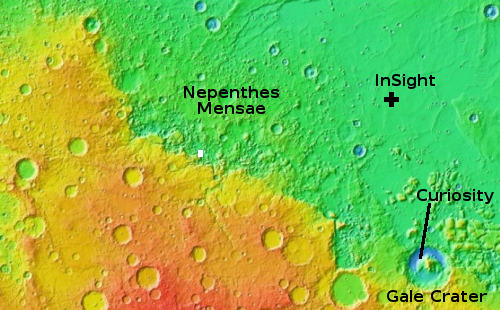 The small white box marks this photo’s location, only one degree north of the Martian equator and in Nepenthes Mensae, a region of chaos terrain between the northern lowland plains and the cratered southern highlands. It also sits about 480 miles west of the lander InSight and about 560 miles east of Gale Crater where Curiosity is roving.

This chaos terrain probably formed in a similar manner as the other chaos terrain in those higher latitudes, erosion from either flowing water or glacial movement. That water however could only have been here a long time ago, when Mars had more water/ice on its surface or when the planet’s rotational tilt or obliquity was higher than today’s 25 degrees and this region was colder than the poles, bringing water down from those poles to fall as snow and form glaciers.

When this was happening here it was also likely the same eon when water existed in Gale Crater as well. Pinning that time down however will require getting samples and dating them, something that will not happen until humans are on Mars.

What this image shows today however is likely an erosion process of surface dust, being blown away by the wind.