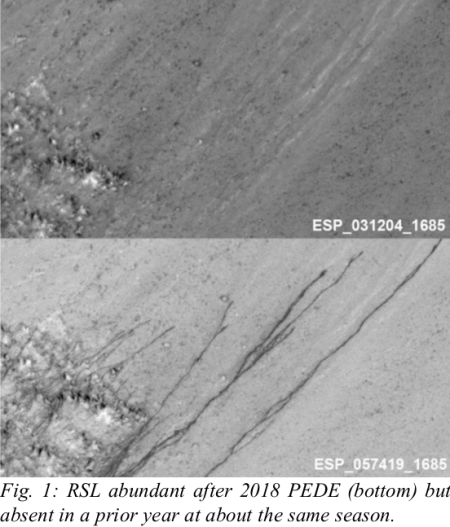 Numerous presentations at this week’s 50th Lunar and Planetary Science Conference in Texas have focused on two different changing features on the Martian surface, dubbed slope streaks and recurring slope lineae (or RSLs, an example of an unnecessary and unwieldy acronym that I avoid like the plague).

These apparently are considered two different phenomenon (with some overlap), something I had not recognized previously. For example, one presentation [pdf] this week described slope streaks as:

…gravity-driven dark or light-toned features that form throughout the martian year in high-albedo and low-thermal-inertia equatorial regions of Mars. The distinctive features originate from point sources on slopes steeper than ~20°, follow the topographic gradient, extend or divert around small obstacles, and propagate up to maximum lengths of a few kilometers. The streaks brighten with time, sometimes become brighter than their surroundings, and fade away over timescales of decades. [emphasis mine]

An example can be seen here. This is in contrast to the recurring slope lineae, shown in the image above, which another paper [pdf] described as:

…dark linear features that occur on the surface of steep slopes in the mid-latitudes of Mars. These areas are warm, occasionally exceeding temperatures of 273-320 K. [Lineae] recur over multiple years, growing during warm seasons and fading away during colder seasons. Their apparent temperature dependency raises the possibility that liquid water is involved in their formation. [emphasis mine]

I have highlighted the key differences. While slope streaks are long lived and change slowly, lineae change with the Martian seasons. And the slope streaks appear to exist at lower latitudes. These difference means that the formation process of each must be also different.

The problem is that scientists still don’t know what causes either, though they have many theories, involving both wet and dry processes.

Most of the presentations at the conference this week focused on the recurring lineae, which I suspect is because of their seasonal aspect. This feature strongly suggests a water-related source for the lineae, and everyone who studies Mars is always focused on finding sources on Mars where liquid water might be found. Also, slope streaks appear more often in dunes, which also strongly suggests a dry process. One paper, however, did a comparison study of lineae with one specific kind of dune slope streak to see if the freatures might be related.

The most interesting result [pdf] for all these papers documented the apparent increase in recurring lineae following the global dust storm last year. The image at the top of that post is from this paper, and shows a fresh lineae where none had been prior to the storm. From the paper’s abstract:

[Mars Reconnaissance Orbiter (MRO)] has been seeing many more candidate [lineae] than in typical years, following the 2018 dust storm. They have been imaged at 216 unique locations during August-December of 2018, about half of them at locations where [lineae] have not been seen previously. They are present on most steep, rocky slopes in the southern middle latitudes in southern summer of Mars Year (MY) 34, rather than ~40% as seen previously. The [lineae] in late 2018 are present over a wider range of latitudes and slope aspect than in prior years. These [lineae] sites also show evidence for recent dust deposition: obscuration of relatively dark areas, overall brighter and redder surface than in prior years, and dust devil tracks.

These post-[dust storm lineae] observations could be explained by flow of freshly-deposited dust down steep slopes. If this is the case, then the otherwise puzzling recurrence and year-to-year variability of [lineae] activity are now explained.

Essentially, this research suggests that recurring lineae are the result of dust deposition, which when increased causes the small dust avalanches that produce the darker streaks. There are of course issues and uncertainties with this conclusion, which the researchers themselves admit to. For example, they do not see how these dust flows could erode the gullies where many lineae are found. Other processes must be involved.

Thus, I especially like this paper’s conclusion, which they also describe as the standard conference conclusion: “More research is needed.”

Below is a list, with links, to all the papers discussing theses Martian streaks.

Among the sources for lineae formation proposed in these papers include dust deposition, brine flow, and atmospheric water vapor. This last theory is interesting in that the scientists suggest that in the chemical interaction of atmospheric water vapor and calcium perchlorate in the ground could act to trigger a dry flow that creates the streak.

The conclusion I get from all these papers is that we simply do not have enough concrete information to determine anything about these streaks or lineae with any certainty. We simply don’t know enough, and are also too far away to obtain the basic information we need to solve the mystery. This might finally change however when Curiosity visits a recurring slope line sometime in the next year or so.