Sunspot update: Another month of greater activity than predicted
August 2, 2021 10:11 am Robert Zimmerman

NOAA this past weekend released an update of its monthly sunspot cycle graph, showing the Sun’s sunspot activity for the past month. That graph is below, annotated to show the previous solar cycle predictions and thus provide context.

In July the Sun’s hot streak of sunspot activity continued. The number of sunspots on its visible hemisphere continued to exceed the prediction of NOAA’s solar science panel, with the numbers in July easily topping June’s numbers. Only at the very end of July was there a streak of five blank days, the first time the Sun has been blank of sunspots since May 6th, a stretch of activity not seen for years, since the last solar maximum was ramping down to solar minimum in ’16-’17.

The political consequences of this continuing high activity could be quite profound. 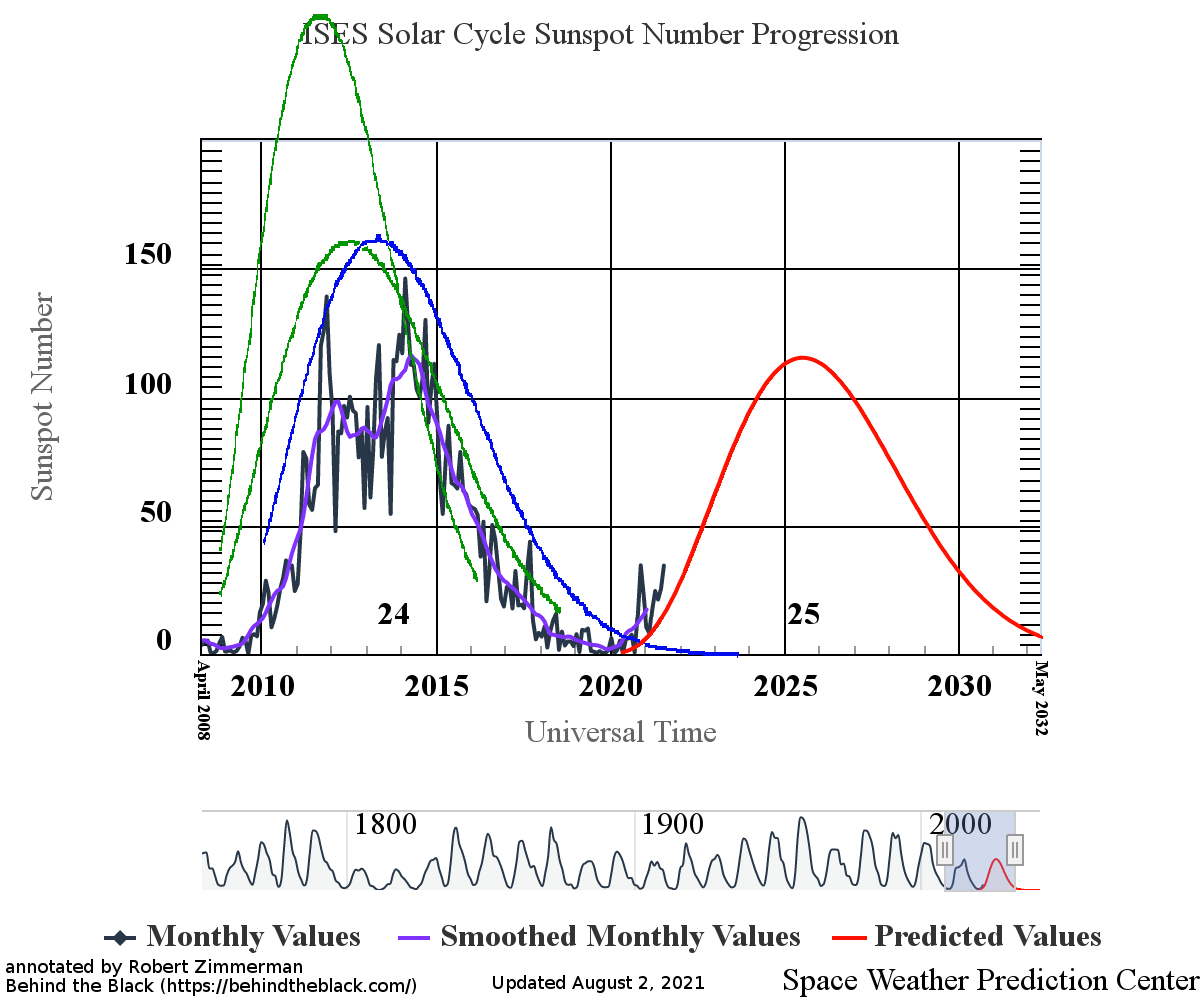 What is most striking about this activity is how it is not only higher than predicted, the slope seems to be steepening with time, as if the Sun cannot wait to get up to solar maximum. In the past it was normal for high cycles to ramp up very fast, and then ramp down more slowly. With the weak solar maximums in ’04 and ’14, that pattern wasn’t followed. The slopes of the ramps up and down were more or less the same.

The unexpected steepening ramp up now strongly suggests that the coming maximum will exceed the predictions far more than the present activity indicates. Right now the high activity really isn’t that much higher than the curve, and could easily be explained as simply a short period when the activity randomly fluctuated higher. In the coming months the activity could drop again, and average out to more closely match the prediction.

However, if this steepening and increasing activity continues, then it could be that the prediction of some solar scientists, that the next maximum will be very strong, contrary to the general consensus of the solar science communty, could turn out right.

If so, the number of sunspots could rise right off the graph, and return to the high activity that was normal for most of the last two centuries.

For those past two centuries that high activity appeared linked on Earth to a warmer climate, which means that in the coming decades such high activity could cause the climate to warm, instead of cool as it has for the past two decades during a period of low solar activity. That rise, possibly caused by the Sun, will then give ammunition to the corrupt power-hungry politicians who wish to blame human activity for global warming. And since much of the science climate community appears captured by those politicians and eager to prove them right rather than follow the data, we will face another drive by those in power to squelch our freedom, using data incorrectly for political ends.

The result will be that we will not find out, one way or the other, as the effort will be to blame humans for the rise, rather than dig in to study all of the data so as to discover what is really happening.