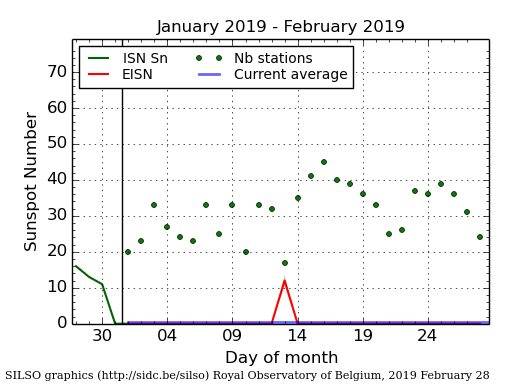 Last month I titled my sunspot update “Almost no sunspots,” as there were only two sunspots for the entire month of July, with one having the polarity for the next solar maximum.

Below is NOAA’s August graph of the overall sunspot cycle since 2009, released by NOAA today and annotated to give it some context.

Note how the almost total lack of sunspot activity during the past three months is far below the expected activity indicated by the red curve. Note too that the activity for this entire cycle has consistently under performed the predictions. The ramp up to solar maximum started later and has ended sooner than predicted, with the activity itself always less than expected.

In fact, this particular now-ending cycle appears to have been only a little more than ten years long, from 2009 to 2019. In the past, short cycles were always associated with very active solar maximums. Weak solar cycles always lasted longer than eleven years. The last cycle however was very unprecedented, being short and weak. Moreover, its double peak, with the second peak the larger of the two, was also unprecedented. In past double-peaked maximums the first peak had always been the larger.

What does this mean for the future? Who knows? I can promise you that the solar scientist community only has a vague idea themselves. What we have been seeing is different that past solar behavior, and means the Sun is teaching us things we didn’t know before.