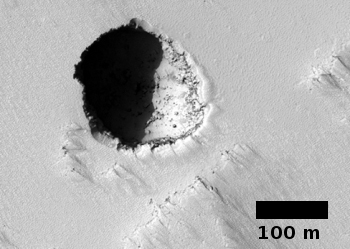 The pit to the right could almost be considered the first “cool image” on Behind the Black. It was first posted on June 20, 2011. Though I had already posted a number of very interesting images, this appears to be the first that I specifically labeled as “cool.”

The image, taken by the high resolution camera on Mars Reconnaissance Orbiter (MRO), had been requested by a seventh grade Mars student team at Evergreen Middle School in Cottonwood, California, and shows a pit on the southeastern flank of the volcano Pavonis Mons, the middle volcano in Mars’ well-known chain of three giant volcanoes. A close look at the shadowed area with the exposure cranked up suggests that this pit does not open up into a more extensive lava tube.

What inspired me to repost this image today was the release of a new image from Mars Odyssey of this pit and the surrounding terrain, taken on July 31, 2019 and shown below to the right. 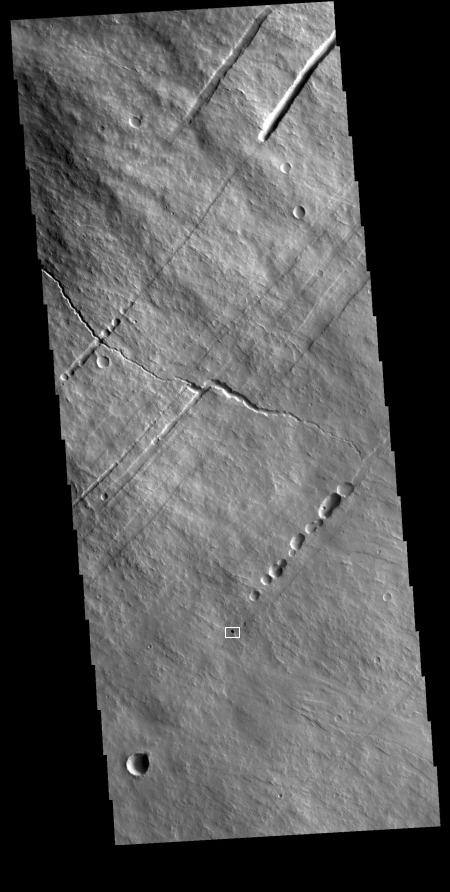 The white box indicates the area covered by the MRO image above. The top of the volcano is to the northwest, so that the slope heads downhill to the southeast.

The caption states that “the linear features [going from the northeast to the southwest] in the image are concentric faults.” Apparently, as Pavonis Mons rose it caused numerous concentric faults to form all around it, as shown by these features.

What is intriguing is the interplay between the lava flow depression going downhill at right angles to these concentric faults. That depression probably indicates the route taken by lava, either on the surface or in a lava tube below the depression itself. At one point that flow is redirected sideways for a short distance by one of those concentric faults, with most of the flow appearing to be pirated by that fault. When the remaining flow leaves that fault it continues downhill until it reaches another large lower fault, where it apparently gets entirely pirated to run within it to the southwest. The line of depressions within that lower fault suggests the existence of a lava tube, a supposition further reinforced by the pit.

What this wider image also suggests is that, even though the pit itself did not provide a direct skylight into a lava tube below, there are almost certainly underground voids of some kind here, running along that line of depressions. Mars’ lighter gravity and different composition would make these lava tubes different from Earth’s, but the superficial evidence does suggest they exist.