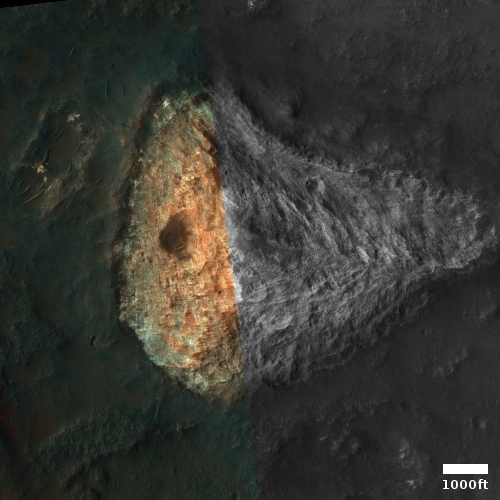 Today’s cool image gives us a sample of the strange colorful hills in an even stranger knobby depression on Mars called Ariadnes Colles. The photo to the right, cropped and color enhanced to post here, was taken on September 10, 2020 by the high resolution camera on Mars Reconnaissance Orbiter (MRO). It focuses on just one of those colorful hills. The color strip only covers the western half, which is why that is the only part of the hill in color.

Ariadnes Colles is a patch of chaotic terrain 110 by 100 miles in size, located in the southern cratered highlands due south of Mars’s volcano country, at latitude 34 degrees south. What makes this particular patch of chaos distinct from the many others on Mars is that the hills, knobs, and mesas within it are routinely bright and colorful, compared to the darker surrounding terrain. Moreover, as noted in this Mars Express press release for images of Ariadnes Colles from that orbiter,

In contrast to other chaotic terrains … Adrianes Colles is not a water-source region. It is still debated, therefore, whether Ariadnes Colles was formed by the action of water or wind.

The darker material in the southern areas is most likely sand or volcanic ash; some slopes of the flat-topped features have been covered by this dark material that was blown up on the slopes.

The overview map below shows the entire patch, with the location of the hill above indicated by the white dot in the red rectangle that shows the full image location. 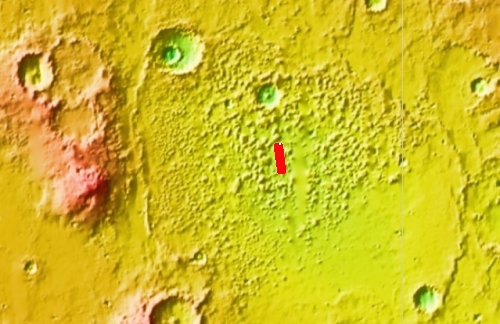 Though most chaotic terrain on Mars is thought to have formed from erosion caused by some water process, and though at a latitude of 34 degrees south this location is within the mid-latitudes where glacial features are found, no such features or evidence of water appear present today at Ariadnes Colles. What we do see is a lot of volcanic ash.

This 2014 paper [pdf], in describing the entire field of knobs, concludes that water must have been involved in its formation, though there is also evidence of lava flows.

The floor is characterized by mesas and knobs that are about 1 to 10 km, generally larger in the central than in the outer part of the chaos. The knobs and mesas typically contain light-toned materials that display different textures. Both phyllosilicates and sulfates are recognized in the light toned materials indicating formation in both a water-rich environment and an evaporative environment. The light-toned materials are often covered around the knobs by a darker rubbly layer interpreted to be lava flows. These morphologies could be the remainder of previously more extended materials, which are more resistant to erosion probably due to a process of cementation by fluid circulation and/or a more resistant capping layer. The presence of dendritic valley networks near the rims of the basin, that run towards its center (for example near 173°E – 38°N) and which confirm past water activity and suggest Ariadnes may have probably hosted a lake.

So what was it, volcanic or hydrology? I don’t think a firm consensus has been reached, though I suspect most researchers think that both were involved. For example, the authors of the above paper conclude that the some of the features they describe required heat from volcanic events to produce the minerals found here.

If water/ice produced these mesas of chaotic terrain, as is seen in the chaotic glacier country to the north in the transition zone between the southern cratered highlands and the northern lowlands, that water/ice appears to been gone for a long time. Now what we see is the erosion by wind of the dark sand or volcanic ash, slowly blowing away to reveal the brighter and more resistant knobs and mesas.

The history could have been as follows. First the mesas and knobs here were formed by water/ice erosion. At some point during that erosion there was volcanic activity, which provided the thermal heat that interacted with the water to produce the minerals.

Over time the region dried out. Later, distant major eruptions laid down a thick layer of volcanic ash covering everything, which the winds of Mars are now slowly eroding away to expose those knobs, mesas, and hills again.