The frozen and changing mid-latitudes of Mars
September 14, 2020 at 12:51 pm Robert Zimmerman Points of Information 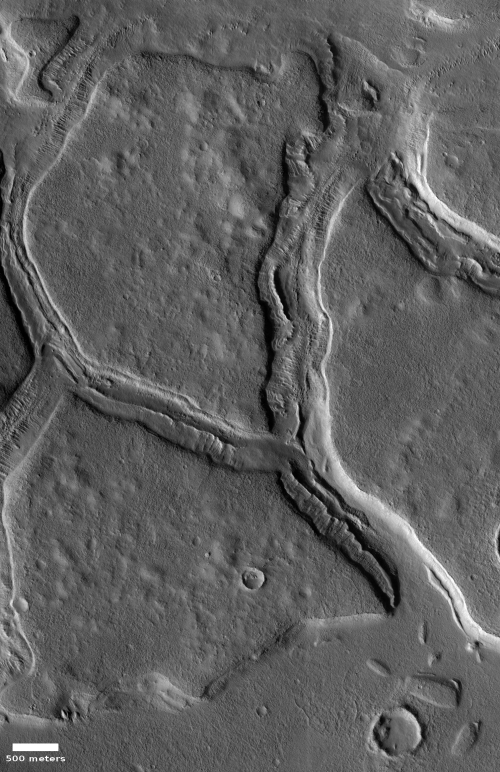 Using “frozen” and “changing” to describe any single location might seem contradictory, but when it comes to the mid-latitudes of Mars, high resolution images keep telling us that both often apply, at the same time and at the same place.

The photo to the right, rotated, cropped, and reduced to post here, is a typical example. Taken on May 8, 2020 by the high resolution camera on Mars Reconnaissance Orbiter (MRO), it shows what the scientists label as “mesas and ridges.” Drainage is to the south, and it sure looks like some sort of glacial flow is working its way downward within the canyons between those mesas.

Overall the terrain has the appearance of a frozen ice sheet, or at least terrain that has a shallow ice table close to the surface. It also looks like chaos terrain in its infancy, the erosion process not yet cutting down enough to make the mesas stand out fully.

The location of these mesas and ridges is shown in the context map below, which also shows that this location is at the same latitude as SpaceX’s Starship prime Martian landing site, and only about 400 to 500 miles to the east. 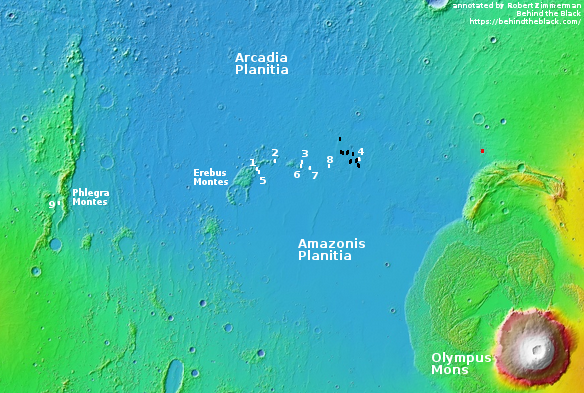 The red rectangle north of Olympus Mons indicates this image’s location. The white and black rectangles indicate images requested by SpaceX for Starship. The numbers refer to specific images, with links to each found here.

At this latitude scientists have found on Mars ample evidence of glaciers, in both the north and south hemispheres. In this region however there is also evidence that there is a ice table very close to the surface. Today’s image gives another example.

Other images of this knobby region on the edge of the northern lowland plains of Arcadia Planitia further reinforce this impression. MRO has taken two other high resolution photos, each less than ten miles to the east and west. The eastern image, dubbed “Fluvial Dissection and Erosion” by the scientists, shows similar canyons and ridges.

Mars at this latitude appears much like Antarctica, a frozen ice sheet that unlike Antarctica is likely covered by a layer of debris and dust, protecting and hiding that ice. It is also a place, like Antarctica, where that ice is flowing like water, albeit in extreme slow motion.

There is plenty of time, however, for this ice to work its magic. It increasingly appears that the ice itself, as glaciers, has acted to shape much of the surface geological features on Mars, many of which at first glance appeared to us Earthbound humans to be meandering river channels. This theory remains unproven, but it fits the facts better than liquid water, which based on what we presently know simply could not have flowed in the thin and cold Martian atmosphere.