The icy Erebus Mountains near where Starship will land on Mars
September 4, 2020 at 2:20 pm Robert Zimmerman Points of Information 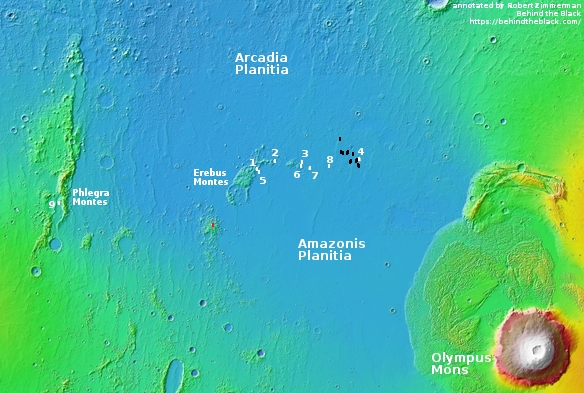 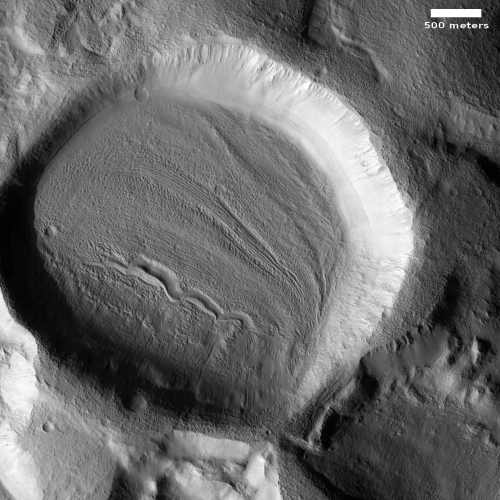 It has been several months since I posted any new photos of the region on Mars which SpaceX considers its prime candidate landing site for its Starship spacecraft/rocket, now under development. The map to the right shows the location of all the images that SpaceX has obtained from the high resolution camera on Mars Reconnaissance Orbiter (MRO) of this landing region, located in the northern lowland plains at the border between Arcadia and Amazonis and to the east of the Erebus Mountains. (See my post on November 13, 2019 for an analysis of the reasoning for SpaceX to choose this region, along with links to each of the numbered images.)

Time to take another look, this time at the very center of the southern cluster of the Erebus mountains. The crater to the right, its location indicated by the tiny red rectangle on the map above, was taken by MRO on May 6, 2020, and shows the typical glacial features scientists find in mid-latitude Martian craters. The floor appears filled with glacial material, with the repeated cyclical flows repeatedly coming down off the north-facing interior rim. That rim would generally be colder and get less sunlight, so snowfall is more likely to pile up there and then flow downward like a glacier, only to sublimate away once it moves out of shadow.

What makes these mountains enticing, only about 400 miles from the Starship landing zone, is not simply what is inside this crater, but what surrounds it. Below is the wider view provided by MRO’s context camera. 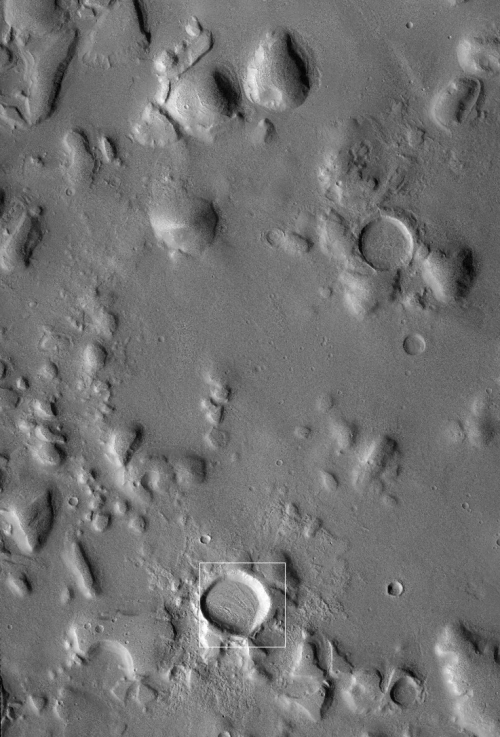 The white box near the bottom notes the area covered by the image above.

To me the knobby scattered peaks of this section of the Erebus Mountains seem to be sitting in a frozen sea of ice. In fact, if you click on the image and look at the top of the full photo you will see what appears to be the front edge of repeated large frozen flows coming down from the north.

These mountains appear to be a very icy place, much like the nearby Phlegra Mountains another 500 miles to the west. One of SpaceX’s Starship images, #9, was taken in Phelgra, and a previous post in April looked at the similar very icy nature of those mountains

Erebus Montes apparently has as much if not more ice, and its terrain is far less forbidding than the mountains at Phlegra. There are no steep escarpments or mountains to cross. Future colonists will need only drive between scattered small hills to get to any ice mining site that pleases them.