The longest lava tube in the solar system?
September 2, 2020 9:19 am Robert Zimmerman

Before I delve into today’s cool image, I think it important to explain to my readers why I seem to post so many cool images from Mars. The simple explanation is that Mars right now is where almost all the cutting edge planetary research is taking place, and as a science journalist focused on space exploration I must go to that cutting edge. My dear readers know that I love variety (just consider the evening pauses on Behind the Black), but you can’t ignore the reporting of real discoveries simply to increase the diversity of one’s posts. This is too often what modern news outlets do, which is also why they often miss the real story.

Anyway, today’s cool image to the right, rotated, cropped, and reduced to post here, shows only a small section of what might be the longest lava tube in the entire solar system. Taken on May 5, 2020 by the high resolution camera on Mars Reconnaissance Orbiter (MRO), it shows a string of pits along a meandering depression coming down the northwest flank of the giant volcano Arsia Mons. The image was a follow-up to a July 2014 photo of the same location, and was taken to produce a stereo pair.

The feature strongly suggests a lava tube, with the pits being skylights into the meandering underground void. From top to bottom this section of the tube is a little over three miles long. Since there are lava tubes on Earth far longer, this one image hardly makes this the longest tube in the solar system.

The tube, however, extends off the image both at the bottom and at the top. Not many high resolution images have been taken in this area, so it is therefore hard to say how far the tube extends. Other nearby high resolution images in this area however have found similar lava tubes, which conceivably could be part of the same tube. The overview map below shows the relationship. 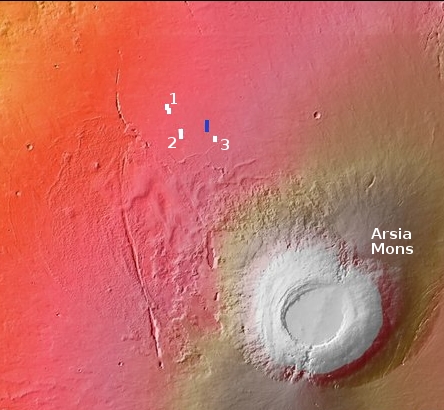 The white box numbered two is another image showing a similar trending depression, though in that case there are no visible skylights. Number three however is another lava tube with skylights, higher up the mountain.

In every image the trend of the tubes or depressions is the same, downhill from the southeast to the northwest. In every image the prevailing winds blow in about the same direction, coming down the mountain’s slope. Excluding #2, which is slightly off line, all the other tubes align nicely and might very well be parts of the same tube.

Finally, the depressions and skylights appear to get larger as you go up the mountain, something entirely to be expected.

With the rim of Arsia Mons about 280 miles away from lava tube #1, and about 40,000 feet higher, this tube has the potential to be many times longer and deeper than the longest and deepest lava tube on Earth, Kazumura Cave in Hawaii, which is just under 41 miles long with a depth of 3,613 feet. And since these giant volcanoes on Mars are by far the largest so far found anywhere in the solar system, this tube could easily be the largest for many light years.

Its underground cross-section could be also be much bigger, due to Mars’ lower gravity. And though there is almost no evidence of shallow ice here near the equator, there still is evidence both of past glacial activity on the slopes of Arsia Mons as well as seasonal water clouds overhead. These lava tubes might therefore still have ice in them, and thus provide a potential future colony site.