The many pits/caves of Mars 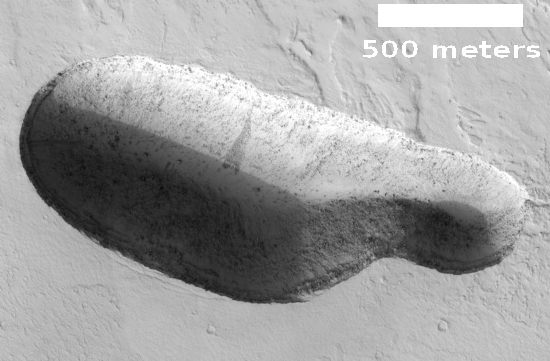 Time for many cool images! Over the years I have written frequently about the pits/caves on Mars, in both magazine articles and the many posts here at Behind the Black. The following posts are the most significant, with the June 9, 2015 providing the best geological background to many of these pits, especially the many located near the giant volcanoes of Mars.

More than 100 were located along the line of the three giant volcanoes to the east of Olympus Mons, the solar system’s largest volcano, as shown on the map to the right. The majority were clustered around Arsia Mons, the southernmost of the three volcanoes, and a place where scientists believe there were active glaciers in the past, a belief that is strengthened by the routine occurrence of water vapor clouds above Arsia Mons’ slopes, suggesting a lot of still present underground water.

Put the two together, available water plus underground caves, and you have an ideal place to establish the first human colonies on Mars. The water provides oxygen and energy, while the cave provides a convenient and easy place to build those first habitats. Not only does the natural roof provide radiation shielding without the need for major construction, you can seal it more easily to create an artificial atmosphere. And because the temperature ranges are more reasonable the environment will be more benign for both equipment and humans. 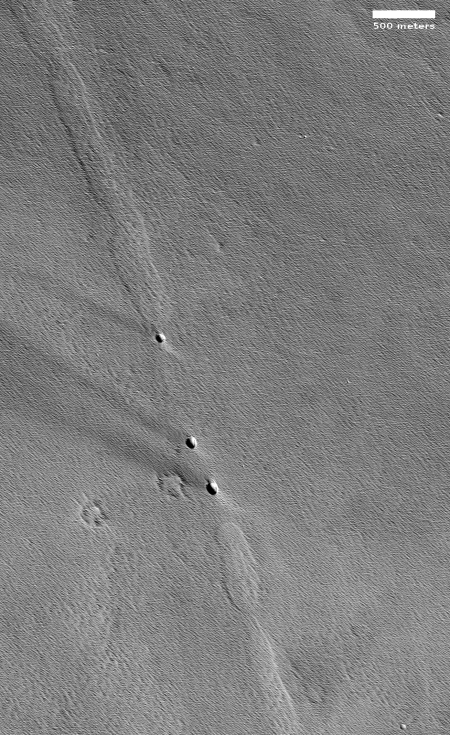 Today’s selection of cool images, all found in the January image release from the high resolution camera of Mars Reconnaissance Orbiter (MRO), include a handful of new pits near Arsia Mons in the volcanic Tharsis Montes bulge, such as a lonely and very distinctive pit to the northeast of the volcano, a second lonely and very distinctive pit to the north of the volcano, and finally the line of three shown in the image to the right, cropped and reduced to post here, with the original viewable by clicking on the image.

That these pits are all in a line, and that they also in line with a shallow straight depression, strongly suggests that they are skylights into a lava tube below. Located to the northwest of Arsia Mons, the southeast-to-northwest trend of the line reinforces this conclusion, suggesting that we are looking at surface evidence of an underground lava tube that flowed down from Arsia Mons, when that giant volcano was active, eons ago.

It is hard to say if any of these pits would provide access into that lava tube. Even a close look at each does not provide enough detail to see whether any passages continue under their rims. If I had to guess, from the image, I would say that access is blocked.

However, there is another detail in the image that suggests otherwise. Note the dark trails to the west of all three pits. These suggest that the prevailing wind is blowing material from the pits in this direction. The problem is that it should be difficult to get the material at the bottom of the pits up to the surface, unless these pits provide open access to a larger interior underground volume. The temperature and pressure differences between the surface and the interior would sometimes cause the atmosphere in the lava tube to expand, causing air to blow upward out of the pits and bringing with it fine particles from below that the surface winds could then catch and deposit to the west.

Not all interesting Martian pits, however, are found near the volcanoes. The pit shown at the top of this post is instead located in the middle of Amazonis Planitia, one of the largest regions of Mars’s northern lowland plains where once an intermittent ocean might have once existed, and is only one of about a dozen located close together at 22 degrees north latitude and 202 degrees east longitude. (Go here and click on the map at this location and you can view the many other similar pits in this small area.)

Whether these pits are volcanic in origin I do not know. Their trend points directly away from Olympus Mons, which suggests they might be evidence of an underground lava tube. Olympus Mons is quite a distance away, however, which makes it unlikely that the pits are related directly to the volcano.

The MRO January image release also includes another similar line of sinkholes in another area of the northern lowlands, this time in Utopia Planitia, at 22 degrees north latitude and 118 degrees east longitude. In this area are many similar fissures and linear sinks that appear more likely caused by faults and fissures in the ground than lava tube flows. The area has not been photographed as thoroughly as the pits in Amazonis Planitia, so it is hard to get a full sense of the geology there.

What makes this Amazonis Planitia pit especially interesting is the large very distinctive dark streak running down its northern wall but originating just below the rim. Such dark streaks are strongly believed to be evidence of melting ice seeping out of the wall which, as it flows down, changes the color of the surface material. (See this BtB post for another very dramatic example.)

While this pit might not be volcanic, it quite possibly could be a good access point to undergound water. It also, to my mind, reinforces the hypothesis put forth in the paper I highlighted yesterday, that a water ice table probably exists below the surface almost everywhere on Mars. And if it doesn’t, it is still likely from the building evidence that there are many places where it does exist and be accessible.

For general reference, the global Mars map below shows the general locations of all these regions, and how they relate to each other as well as to the locations of all past and planned landers/rovers. 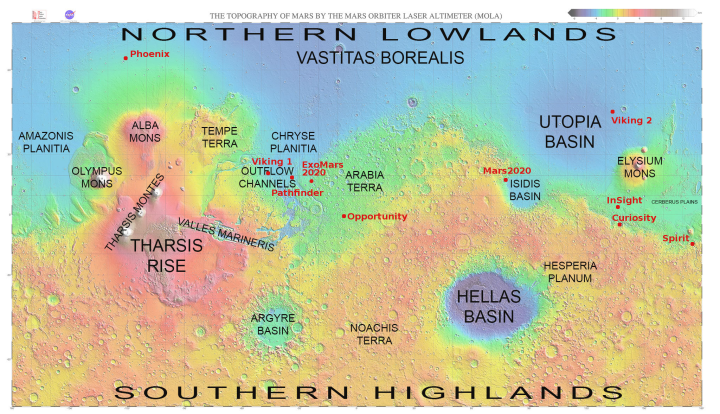