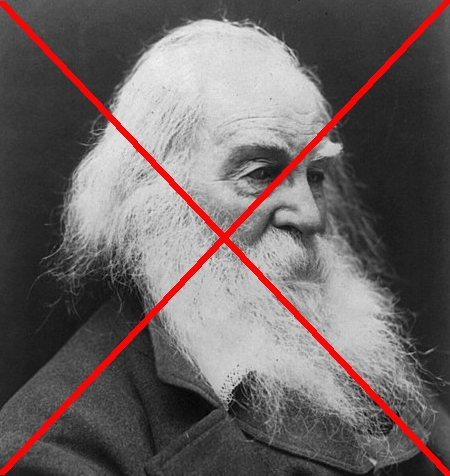 The onset of the modern dark age: Ivy league college Rutgers University in Camden New Jersey is now removing its monument to 19th poet Walt Whitman because of petitions and slanders against him by today’s blacklist culture.

Rutgers University-Camden will remove a statue of the famous poet Walt Whitman from the center of campus as a result of activists’ petitions and a recommendation from a committee of scholars. The statue of Whitman, featured prominently in the front courtyard of Camden’s Campus Center, will be “relocated to a historically relevant site on campus and contextualized,” interim Chancellor Margaret Marsh recently announced in an email to students and employees.

That new location has yet to be announced by campus officials.

A petition circulated last year stated that “the statue of Walt Whitman glorifies a man who we should not hold such a place of honor on our campus. … He instead stood for white supremacy and racism against Black and Indigenous Americans.”

In other words, because Whitman was a man of his time and not perfect, his memory must be wiped from all history, his poems burned, and all effort to teach his poetry ended forthwith.

This effort is quite symptomatic of the entire modern leftist effort to slander all of American history.

No discussion or memory of Jefferson, Washington, Lincoln, and all the great humans of American history can be allowed, because these human beings might have once done something that someone today doesn’t like. Everything from western and American culture, from Cinderella to Peter Pan to Shakespeare, is racist and advocating white supremacy, simply because these great works of literature did not care about race. That they were simply telling stories about people who happened to be white, and included no minorities, proves they were bigoted, and must be banned forever!

Of course, we must not question the absolute perfection of the sainted radicals today who demand these high and unreasonable standards on past great Americans and its literature. Today’s radicals must be worshiped blindly, because they have no flaws, and if you dare suggest that they might be wrong, in the slightest, then you too are evil and must be blackballed also.

As noted by Kelly Scott Franklin, a professor of English literature at Hillsdale College and a scholar of Whitman,

“What this new movement of censorship really wants is to do away with the very act and process of education, because education is complicated and it’s hard work. It requires a lot of sifting to find beauty, truth, and goodness,” he said. “It requires compassion and a willingness to try to see the world as others did in their time and place. It requires acts of magnanimity toward flawed and wounded human beings, even if we disagree, and even if they’re in grave error. Those activities are hard–in the classroom and in everyday life. So it’s much simpler just to silence, cancel, and destroy.”

That so many ordinary Americans are now so quick to bow to this campaign of censorship is our real problem. Rather than stand up to these bullies people now run in fear. If decent Americans do not start ignoring the insane demands of these thugs soon, then all of our history and literature will be destroyed. The only past that future generations will know will be the distorted hate advocated by these Marxists and bigots.