Today’s blacklisted American: Anyone who is white, Christian, or male at Cigna
April 19, 2021 11:59 am Robert Zimmerman 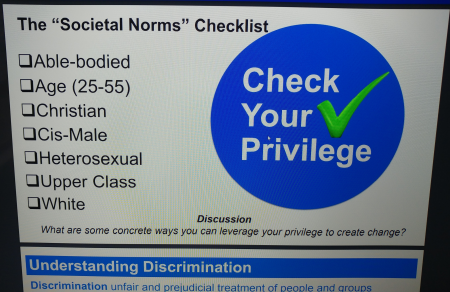 According to Cigna’s training, these are bad things.

They’re coming for you next: Company documents as well as interviews have confirmed that the health insurance company Cigna actively discriminates against whites in its hiring practices, as well as runs training sessions using Critical Race Theory that aims at making all whites, males, and Christians ashamed of what they are, because by definition such people are automatically racist bigots.

The original story is here. From the first link:

“Given the hiring practices they have in place where white, male candidates are blocked, regardless of qualifications, I have to say, ‘Yes, there’s obvious discrimination at this company,’” an anonymous employee told the Washington Examiner.

An employee also suggested a candidate with years of industry experience, but the hiring manager said the candidate, a white man, could not be interviewed because he did not meet the diversity criteria. Some employees told the Examiner that these racial quotas often translate to an inability to fill jobs in departments focused on tech or data. “I can’t fill these jobs,” an employee said.

The training is as bigoted, singling out whites, Christians, and males for specific condemnation, as the bigoted program Critical Race Theory routinely does. The training also buys into the anti-American and factually incorrect 1619 project, which falsely claims that racism and slavery were central to the making of the United States, when the facts clearly show that they were peripheral and counter to everything the American nation was built on. (In fact, I have a new book, Conscious Choice: The Origins of Slavery in America and Why it Matters Today and for our Future in Outer Space., that is finally close to publication that proves beyond a shadow of doubt the complete lie of the 1619 project.)

While the company denied it discriminates against whites, it also did not explicitly deny the content of the story.

None of this is unusual today in corporate America. Big corporations have bought into anti-white bigotry of Critical Race Theory and the 1619 project, with great enthusiasm. They, like the Marxist bigots who push this stuff, want to see the history of America nullified and replaced with a power structure with them in charge, and everyone else forced to do their bidding.

The worst part of this is that almost all Americans are going along, either out of fear, ignorance, or eager compliance. You can’t have a free nation with a citizenry that easily cowed.