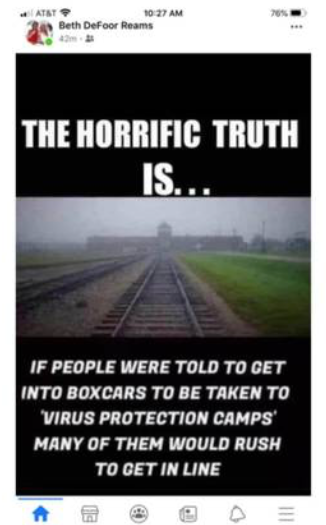 They’re coming for you next: Beth Reams, a math teacher at a Missouri prep school was fired when first some school alumni complained about her conservative politics that she posted on her private Facebook page and then the school administration discovered that she treated all her students equally and made no effort to find out their religion or race so as to promote the bigoted concepts of modern critical race theory.

The article at the link above tells her sad story in great detail, how the most progressive teachers and alumni from Pembroke Hill School in Kansas City, Missouri, started a campaign against her, with some accusing her of being anti-Semitic because in one Facebook post in August 2020 she published a meme — posted to the right — that made the entirely rational analogy between the Nazi death camps and the increasingly harsh COVID mandates being imposed by the state and federal governments.

It is absurd to accuse Reams of anti-Semitism for this meme. I am Jewish and lost relatives in the Nazi concentration camps, and I applaud Reams for posting it, because it expresses the very same ideas I myself have repeatedly expressed throughout 2020, that the harsh lockdowns and restrictions being imposed by governments were morally wrong, and could only lead to exactly the same kind of genocide as committed by the Nazis.

Reams’ firing however appears to have finally been prompted from something even more absurd and horrifying, revealed by the transcript of a Zoom meeting between Reams and Pembroke’s principal, Mike Hill, and its Director of Human Resources Vanessa Alpert. It appears the principal was upset because Reams made no effort to identify her students’ ethnicity or religion and make it their number one defining attribute. Instead, she focused entirely on teaching them all equally so they could learn math from her. The key portion of the transcript:

Reams: I don’t know which ones of them are Jewish, but I have no qualms with you talking to any of my students. I’m very confident in that. …

Hill: I wanted to go back to something you said earlier … If I asked you today which of your students were Jewish, you probably couldn’t tell us … One of my concerns is that you don’t have that information … What I believe we’re trying to do … is create a division and be a part of a school where not only inclusivity is important, but also awareness …

Reams: I hear you. I just think that it’s very difficult, especially in math, to get to know a lot of things about the kids, and I think religion should not come up in our math class … I think where it becomes important for me to understand [who is Jewish] is when I do see an absence for a Jewish holiday … Then, of course, it would come on my radar. I think especially, this year in particular, every teacher would agree it’s been a lot harder to get to know our students … I think it’s important that when my kids walk in the room, I’m judging them on their math.

Hill: Do you know which [students] are Latino?

Reams: I couldn’t sit here and label my kids.

Hill: Do you know which ones are East Asian? … The whole colorblind thing … is driving me crazy. Because I think it’s very dangerous. [emphasi mine]

The highlighted words tell us everything. Reams wanted only to judge her students on their school work. The school’s principal however thought it “dangerous” to treat people as equal humans. He wanted Reams to put their race and religion first, and favor some because of those attributes.

Moreover, while Reams apparently made a strong effort to keep her politics out of her classroom, many leftist teachers at the school did not.

Reams described the environment at Pembroke Hill as “hostile” toward conservatives at the faculty and staff level, as well as for students.

She said that following the 2016 election, her conservative club students began complaining that teachers were injecting their liberal worldview into everyday conversations. One student claimed that a teacher began the school year by stating that President Donald Trump is a “coward.” Another alleged that the teacher congratulated 18-year-olds for voting Trump out of office after the 2020 election.

The school had no problem with this leftist political advocacy in the classroom. What was forbidden was for a conservative to have a contrary opinion outside the classroom. And thus ended her twenty-five year career as a teacher.

This tale has only just begun. The intolerant leftists who now control our culture will soon no longer be satisfied with firings and blacklists. Soon they will demand prison sentences, and if that doesn’t work to silence their opponents they will then look to that meme at the top of this post and consider it a good option.

You have been warned. You can either take this warning seriously, or you can continue to put your head in the sand and continue to make believe oppression is not taking control of America. Your choice.