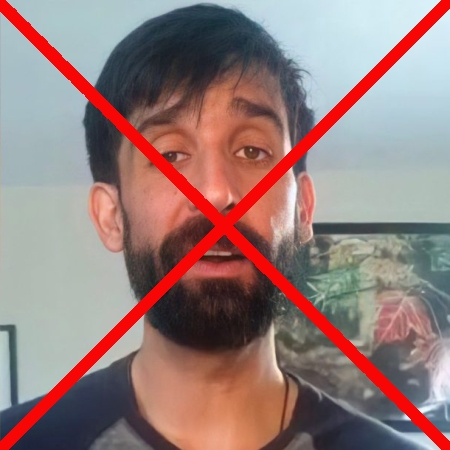 Matthew Perna, now dead because he simply expressed an opinion

Blacklists are back and the Democrats have got ’em: Matthew Perna, one of the vast majority of demonstrators who came to the Capitol on January 6, 2021 to peacefully protest the installation of Joe Biden as president, has now apparently committed suicide at the age of 37 because of the Biden administration’s endless persecution, slander, and legal attacks against him.

He attended the rally on January 6, 2021 to peacefully stand up for his beliefs. After learning that the FBI was looking for him, he immediately turned himself in. He entered the Capitol through a previously opened door (he did not break in as was reported) where he was ushered in by police. He didn’t break, touch, or steal anything. He did not harm anyone, as he stayed within the velvet ropes taking pictures.

For this act he has been persecuted by many members of his community, friends, relatives, and people who had never met him. Many people were quietly supportive, and Matt was truly grateful for them. The constant delays in hearings, and postponements dragged out for over a year. Because of this, Matt’s heart broke and his spirit died, and many people are responsible for the pain he endured. Matt did not have a hateful bone in his body. He embraced people of all races, income brackets, and beliefs, never once berating anyone for having different views.

During and after the protests in Washington on January 6th, it was obvious to anyone who wanted to pay any attention at all that almost all of the Trump supporters behaved properly, legally gathering to peacefully protest. A handful acted badly, with some apparently FBI provocateurs and some apparently disguised Antifa agents also acting as provocateurs.

Most however entered the Capitol when the Capitol police opened the doors for them and allowed them in. Most then strolled through the Capitol taking pictures like tourists. Little was damaged, with the only people killed an unarmed protester shot by police. And these so-called “insurrectionists” then left peaceably before the day was out.

Perna did exactly this. In fact, he was inside the Capitol for all of 20 minutes, did nothing wrong, and then left. For this, the Biden Justice Department has been persecuting him for the past year, eventually forcing Perna in December to plead guilty…

… to one felony charge of obstruction of Congress and three misdemeanors, WKBN 27 reported.

That felony charge could have put Perna in jail for 20 years while also subjecting him to heavy fines. Based on the harsh sentencing imposed on other January 6th protesters for similar behavior, Perna had every reason to expect a heavy sentence at his April 1st hearing.

When one compares the severity of the charges against Perna and the other January 6th protesters with the light sentences and often utter dismissal of all charges against the Antifa and BLM rioters — who not only burned down whole businesses but caused the deaths of innocent bystanders — it makes one want to puke. No wonder Perna was overwhelmed with depression, as indicated by his family in the obituary. He had seen his glorious free American nation die, and was being crucified by the power-hungry government that now ruled it.

It is once again critically important to identify Perna’s persecutors: Democrats controlling Congress, the Presidency, and the Department of Justice. These thugs cannot tolerate any dissent from anyone, especially if it is loud, outspoken, and coming from ordinary people. Such dissent must be squelched, and because the average Americans who protested on January 6th have little power, these bullies find them easy targets for slander and oppression.

And if you think this doesn’t concern you because you weren’t there on January 6th, you are fooling yourself. The more success these Democratic Party bullies have had in destroying their enemies, the more widely they have been spreading their attacks, so that now all their opponents are targets. The oppression has only just begun, and will grow worse if Americans do not begin standing up to it, hard.