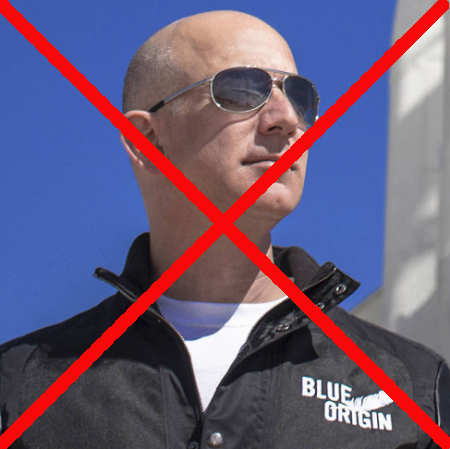 Jeff Bezos: The next target in America’s daily two-minute hate.

They’re coming for you next: As a clear indication of the ugliness of modern society and the eager willingness of far too many Americans to hurt or even kill those they disagree with or do not like, two different petitions have now garnered more than 175,000 signatures demanding that Jeff Bezos, the founder of Amazon and Blue Origin, be forced to die in space rather than safely return home during his planned July 20th suborbital commercial flight on his New Shepard spacecraft.

The two petitions can be seen here and here. Both have received a lot of media attention, such as these articles in the Guardiane, MSN, and the New York Post, all of which immediately caused the numbers of people signing the petitions to skyrocket. Both petitions are now “one of the top signed on Change.org!”

Anyone who has read any of my commentary on the business of commercial space during the past five years will know that I have been strongly critical of Jeff Bezos, for many legitimate reasons. His company Blue Origin has stalled, and appears more willing to manipulate politicians and government regulations for its benefit than actually build and fly anything. His company Amazon has eagerly joined the new effort to blackball and censor dissenting opinions.

To gleefully create and sign a petition that literally calls for his death however is incredibly uncivilized. That these petitions, both of which appear to have been created initially as jokes, have actually obtained so many signatures so quickly well illustrates our society’s descent into savagery and a new dark age. Nor has the reporting by the press found this behavior offensive. In fact in many cases the reporting, such as at MSN and the Post above, practically celebrates the goal, finding it amusing. Then there was this comment at the first link above:

Wow. So much at stake. And so little actual power. The cry of more than 100,000 merely shows their inability to really do anything but vent their anger.

This mass populist outrage will have no effect on actual events. Since New Shepard lacks the power to send Bezos into orbit, the odds of stranding the billionaire in space permanently are exactly zero. The vehicle will up and then come down, all in the space of 10 to 11 minutes. Bezos, his brother Mark, an anonymous bidder paying $29.68 million for a seat, and a fourth person yet to be revealed will be returning to Earth regardless of how many people sign the petition.

Bezos hasn’t been literally blackballed, but the petitions and the press’s gentle endorsement of them reveal that a lot of people would like to do it. Worse, the petitions show that a lot of people in America today are so filled with hate and envy that they no longer see anything wrong with joining in on a two-minute hate, nonchalantly calling for the death of someone. It is also incredibly hypocritical, as I have no doubt that practically everyone who has signed these petitions has also purchased something from Amazon at one point.

Let’s perform a thought experiment. Would any of the signers of these petitions celebrate a different petition, demanding that all blacks be sent back to Africa, because “that’s where they belong!” Would they celebrate a petition that called for the banning of all Jewish businesses, because the signers don’t like the Jewish faith? What about whites? Should all whites be ostracized because a very small handful are bigoted? Certainly a petition to imprison all Trump supporters seems reasonable, considering their unwillingness to accept his clearly evil “orangemanbad” persona.

Maybe we should kill everyone in these groups, so we can guarantee that very tiny minority of rotten apples within each can’t exist.

This is all very ugly, especially the glee I sense from some about the very idea. I’d say they should be ashamed of themselves, but then, they have no shame. They want to hurt their opponents, and have been showing us their willingness to do so now for months.