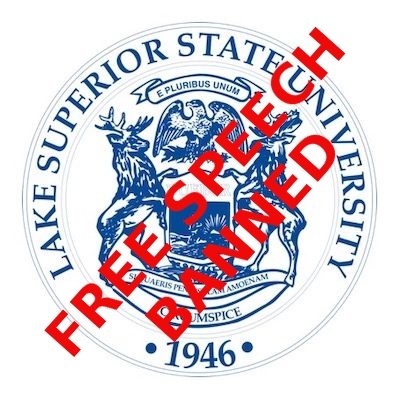 The modern dark age: In June Lake Superior State University earned the Speech Code of the Month award from the Foundation for Individual Rights and Expression (FIRE) for having a vague and oppressive policy towards the placement of posters on campus.

Students wishing to put up posters on campus at Lake Superior State University better choose their words carefully, as the public university’s posting policy threatens “disciplinary sanctioning” over material deemed “offensive, sexist, vulgar, discriminatory or suggestive.” The trouble with this policy is that anyone, for just about any reason, can claim that someone else’s speech is “offensive” or “suggestive.”

FIRE’s main complaint about the college’s poster policy is that it is “overbroad” and “vague,” and could be abused to ban almost any speech. Students are thus forced to self-censor out of fear that any proposed poster he or she wishes to post could be deemed “offensive” and not only be banned, but cause the school to impose sanctions against the student.

All postings must first be approved by the Campus Life Office, located in the Cisler Center. Postings must bear the most recent stamp of approval. Postings can only be placed in designated areas. Legitimate posting areas will be indicated as such. Postings cannot be attached to walls, doors, ceilings, windows or University staff boards, nor are they to be slid under doors or placed on vehicles without the prior written permission of the Campus Life Office. Postings deemed offensive, sexist, vulgar, discriminatory or suggestive will not be approved. Failure to comply with this policy will result in the removal and disposal of the postings in addition to possible future posting denial and/or disciplinary sanctioning of the individual(s) involved. [emphasis mine]

Though Lake Superior officials can certainly supervise the placement of posters so that they do not damage property, these officials have no right to approve or disapprove any poster because of its content. It is irrelevant if speech is offensive or vulgar or discriminatory (how is that even possible?) or suggestive. The first amendment protects such speech. You don’t like what someone says? Too bad. You have only two choices in a land of free speech: Ignore it, or answer it with more speech.

Nor is this the only example of oppressive policies at Lake Superior. Though FIRE sanctioned this college seven years ago for its authoritarian and illegal speech code, the college has not only done nothing to correct the problem, it has expanded these policies to increase their restrictive nature.

The real question is this however: Is the United States a land of free speech? At Lake Superior State it appears it is not. This oppressive school has decided that speech is not free, it must be approved by the school, and can be banned at any time if the administration deems it unworthy.

The school is also “a publicly funded, autonomous state university operated under the control of an eight-member board of trustees, who are appointed to eight-year terms by the governor.” One wonders what the Michigan legislature has been doing during the past seven years, especially since the state legislature has been entirely under Republican Party control during that time, and also controlled the governorship from 2015 to 2018. This so-called conservative party that stands for American values could have easily threatened this university’s budget if it didn’t clean up its act.

Instead, the stupid party did nothing. No wonder many people see no point in voting. More important, this inaction by Michigan’s established Republican Party clearly explains why Trump’s endorsement carries such weight. The public doesn’t believe these lying politicans any longer. Instead it relies on the recommendation of Trump because he is clearly not part of that establishment, has proven he will no longer bow to its wishes, and above all, has shown that he stands by his word and will do what he promises.

The general public has wanted change now for more than two decades, and no one has given it to them. They will either now force that change through new faces, or we shall see violence and war unimagined in American history.