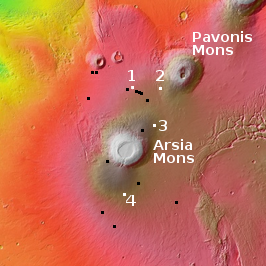 Each month I go through the monthly download of new images from the high resolution camera on Mars Reconnaissance Orbiter (MRO). And each month since November I have found a bunch of newly discovered pits photographed in the region around the volcano Arsia Mons (see: November 12, 2018, January 30, 2019, February 22, 2019, April 2, 2019, and May 7, 2019). The map on the right has been updated to include all those previous pits, indicated by the black boxes, with the new pits from June shown by the numbered white boxes. 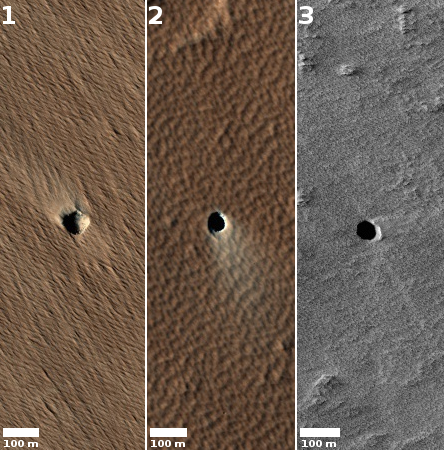 All three are what the scientists doing this research call Atypical Pit Craters:

These Atypical Pit Craters (APCs) generally have sharp and distinct rims, vertical or overhanging walls that extend down to their floors, surface diameters of ~50–350 m, and high depth to diameter (d/D) ratios that are usually greater than 0.3 (which is an upper range value for impacts and bowl-shaped pit craters) and can exceed values of 1.8. Observations by the Mars Odyssey Thermal Emission Imaging System (THEMIS) show that APC floor temperatures are warmer at night and fluctuate with much lower diurnal amplitudes than nearby surfaces or adjacent bowl-shaped pit craters.

The fourth pit, shown in the reduced and cropped image below, might actually be the most interesting of the June lot. 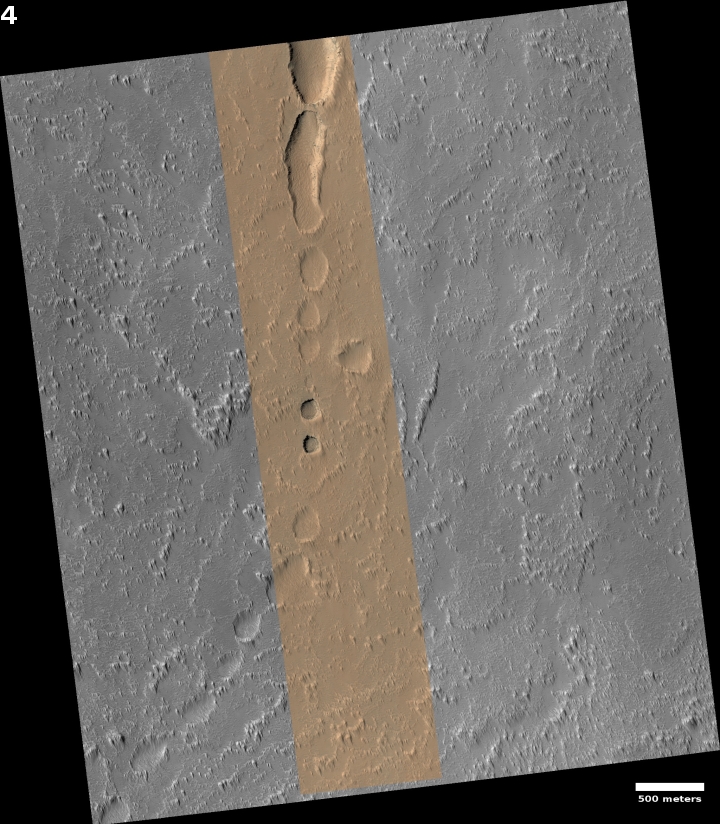 Unlike the others, this image does not show an atypical pit crater, but a series of relatively shallow depressions, two of which are deeper and sharp-sided, suggesting the existence of an underground lava tube flowing southward along this line and down from Arsia Mons to the north.

Unfortunately, MRO has not yet taken any other high resolution images either to the immediate north or south of this photograph, so we do not yet know for sure how far this supposed underground lava tube might extend. A look at this location with the lower resolution but wider view provided by Mars Odyssey’s camera strongly suggests that this is part of a much longer lava tube system.

Before I posted this June update, I wanted to get a better understanding of this research, so I contacted the scientist who as been requesting these images, Chris Okubo of the U.S. Geological Survey. I wanted first of all to find out how he knew where to aim MRO to find these pits. He explained that he was working with Glen Cushing, also of the USGS, who had been the lead author of the scientific paper above and who has provided me considerable help for my previous posts. Okubo explained that,

Glen finds possible pits in lower resolution images, such as CTX [on MRO] and THEMIS [on Mars Odyssey] then passes the coordinates on to me…We are just cataloging them in the hopes that someday one of us, or someone else will have the time to investigate these further.

If you compare my map above with the map in Cushing’s 2015 paper, posted by me on June 9, 2015, you can see a close match between many of the high resolution pits that MRO has been photographing with the pits found by Cushing using the Mars Odyssey THEMIS camera.

It appears therefore that they are not so much discovering new pits but getting high resolution images of those previously identified pits. A quick scan of both maps suggests that they have so far captured only a small percentage, but my map is certainly not complete since I only started this monthly review about a year ago. I suspect if I was to go through the entire MRO archive since 2015 I would find many more high resolution pit images. Since they seem to image about three a month, that would mean that since 2015 they have probably photographed a majority of the 100 or so pits identified in the 2015 paper.

This concentration of pits/caves on Arsia Mons raised an additional question in my mind. In my review of the MRO archive I have found comparatively few caves or pits photographed in any other region on Mars. A few have been found, but my impression is that the bulk of caves/pits so far found on Mars have all been on the volcano slopes near Arsia Mons. I wondered if this pattern was due to some fundamental aspect of Martian geology, or was because of a bias in either our instruments or observations. Dr. Okubo explained that the answer could be both:

As Dr. Okubo suggests, the data indicates that lava tubes can and have formed in the lower Martian gravity. The lack of other caves/pits elsewhere could simply be because we can’t see their entrances, or it could be that other types of caves, created from other kinds of flows (water, ice, etc), simply don’t form on Mars.

At the moment this remains an open question, but an important one, as it will tell us whether we shall find Martian caves in other places on the planet. Caves are excellent places to build a colony, as they provide protection from radiation and the daily wild swings in surface temperature. If caves are generally only found in the volcanic regions of Mars, we might find that our initial underground colonies either will be far from other resources, or we will have to build them on the surface, a considerably more challenging engineering problem.

If however caves are generally only found in the Tharsis region, and we find water/ice in only a few of these volcanic caves, those caves could end up to be among the most valuable real estate on Mars.