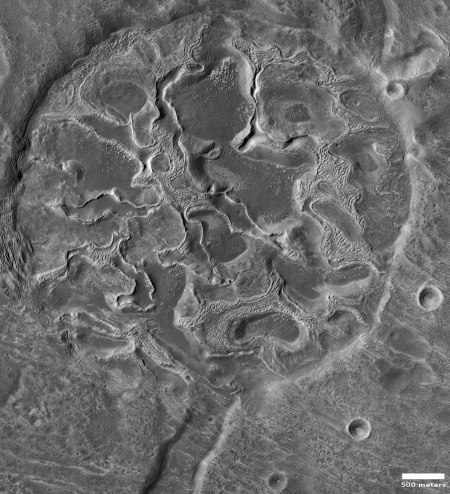 Cool image time! In reviewing today’s October release of new images from the high resolution camera of Mars Reconnaissance Orbiter (MRO), I came across the strange geology shown in the image to the right, rotated, cropped, and reduced to post here.

The uncaptioned image calls these “glacial features within crater.” The crater is located at 35 degrees north latitude in Arabia Terra, one of the more extensive regions of the transition zone between the northern lowlands and the southern highlands. It is also located within the northern band from 30 to 60 degrees latitude where most of the buried Martian glaciers are found.

The most abundant type of buried glaciers are called concentric crater fill (CCF) because they are found inside craters, and often show decay in a concentric manner. This weird feature likely falls into that category, though I would hardly call these glacier features concentric.

I’m not even sure if this is an impact crater. If it is, its rim has been heavily obscured, making it look instead like an irregular depression with one outlet to the south. In fact, I suspect it is possibly one of the lakes that scientists believe pepper this part of Arabia Terra and might have contained liquid water two to three billion years ago. That water would have later frozen, and possibly become covered by dust and debris to protect it.

According to present theories, Mars is presently in a period where its mid-latitude glaciers are shrinking, the water sublimating away and being transported back to its poles. The weird formations here suggest this process. Imagine what happens when you spray warm water on a big block of ice. It dissolves, but randomly to form weird shapes.

In this case the glacier is shrinking randomly where the ice has gotten exposed. In the thin Martian atmosphere, it transitions directly from a solid to a gas, sublimating into the atmosphere to leave these inexplicable shapes.