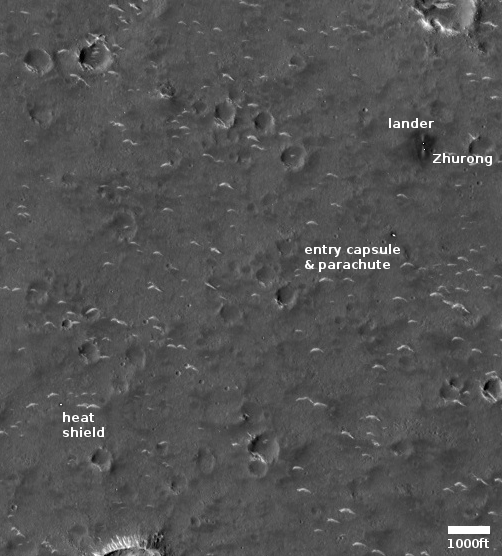 Though the Chinese had earlier this week released one image taken by their Mars orbiter, Tianwen-1, showing their rover Zhurong on the surface of Mars, they did not provide any specific location information.

This lack has now been filled by a new high resolution image of Zhurong taken by Mars Reconnaissance Orbiter (MRO) on June 6, 2021. This image, cropped to match the Tianwen-1 image and annotated by me to post here, shows the parachute, entry capsule, heat shield, lander, and rover. I have added white dots to distinguish the rover from the lander, which indicate that since the Tianwen-1 orbital image the rover had moved south about 70 feet, suggesting it has been able to travel on the surface.

What this MRO image provides that the Chinese refused to reveal is the latitude and longitude of that landing site, which in turn tells us that the lander put down about 14 miles to the northwest of its targeted landing spot. The mosaic of MRO context camera images below show this landing spot in context with the surrounding terrain. 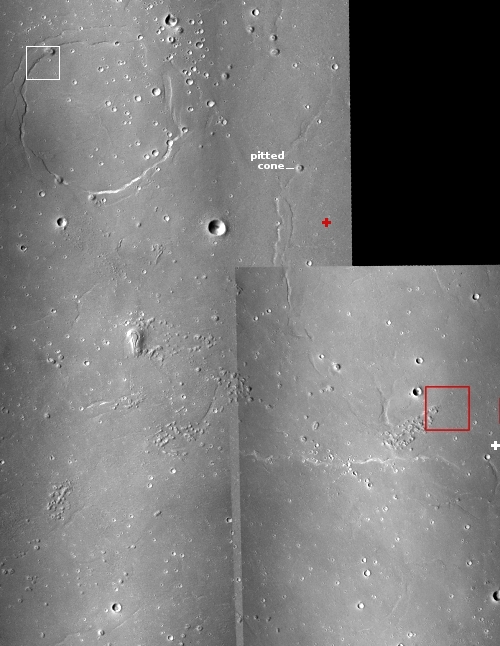 The white cross on the right indicates the targeted landing spot. The red cross marks the actual landing spot. The red box shows the area covered by one of the very few orbital images released by China from its Tianwen-1 orbiter. The white box near the circular feature was a cool image I highlighted only four days ago that described some the most interesting geology in the Zhurong landing zone.

Alfred McEwen of the Lunar & Planetary Laboratory in Arizona and MRO’S principal investigator had requested these images. When I asked him where he would send Zhurong if he was in charge he instantly responded, “Definitely head northwest to the pitted cone.” As McEwen explained in that post earlier this week, this area of Utopia Planitia…

…may be the location of really voluminous eruption of muddy sediments, perhaps the remnants of an ancient ocean. Or maybe it was lava. The pitted cones are a key feature.

The only way we can learn whether these cones are made of muddy sediments or lava is to go there.

So far the Chinese have moved Zhurong to the south, not the northwest, but the mission has only begun, and is set to run through the end of August, assuming nothing goes wrong. Where they send it however is going to be their little secret, as China is very tight-lipped about what it does or plans to do. For example, they have so far only released three orbital images from Tianwen-1, though it is certain it has taken many many more. They have also told us nothing about Zhurong’s condition and state of operations once it successfully rolled off its lander three weeks ago.

This story at Nature makes an estimate at the territory reachable during the next three months, which would make reaching that pitted cone unlikely. The article however also recognizes that the rover could go much farther should it last longer, as Yutu-2 has on the Moon and Spirit and Opportunity did on Mars.