Engel’s loss, which came despite the support of Democratic Party leaders, shows that the traditional incumbent advantages ― cash, name recognition and high-profile endorsements ― don’t inoculate party veterans against the challenge of a left insurgency.

That’s particularly true in New York City, which was also the site of Rep. Alexandria Ocasio-Cortez’s landmark primary win in 2018. That Bowman, an unabashedly left-wing Black candidate, was able to prevail in a district that includes predominantly white, affluent suburbs is, in some ways, even more remarkable.

…In his announcement video, which captured Bowman walking through the subway, he described his vision for a brighter future ― one with “Medicare for All,” tuition-free public college, a Green New Deal and racial equity ― from the vantage point of someone who grew up in poverty and remains on the front lines of the fight against it. “As educators, we work with children and families who suffer from poverty, asthma from pollution, homelessness, lack of health care,” he said.

They’re coming for you next: Proudly communist Alexandria Ocasio-Cortez (D-New York) today won her Democratic primary in New York, garnering 70% of the vote.

I know that many conservatives believe that the madness of the past four months will finally convince voters that it is time to reject the Democratic Party. I have seen no evidence of this. Instead, what I see is a Democratic voting block that remains set in concrete, immune to any facts or ideas that challenge its position. And it has remained so my entire life.

This victory by Ocasio-Cortez illustrates this. Despite her campaign to kick Amazon out of New York (costing her district tens of thousands of jobs), despite her clear lack of coherent knowledge of history or science, despite her Marxist agenda (as very well illustrated by her Green New Deal), and despite her generally hateful and racist rhetoric towards those who disagree with her, the voters in her district want her, and voted overwhelmingly for her.

In New York there is no viable Republican Party. Ocasio-Cortez has essentially won another two years in office tonight, as well as an endorsement of her race-based policies.

They’re coming for you next: The family of a little girl who had been doing silly videos making fun of Alexandra Ocasio-Cortez (D-New York) has shut down all of her social media accounts and will no longer allow her to do videos because they were doxed and they have been receiving death threats on their home phone. 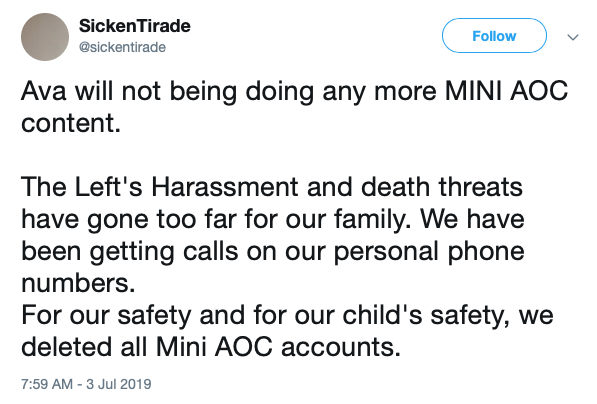 Words fail me. I wonder what Ocasio-Cortez’s response will be for this disgusting behavior. I expect nothing, or if she does say something she will equivocate somehow, trying to put some of the blame on the little girl and her family.

It increasingly appears that the left and the Democrats (I repeat myself) are now willing to threaten little children for making silly fun of the politicians they support.

As I have said repeatedly, they’re coming for you next.

UPDATE: More details here, including one of the girl’s truly hilarious videos.

They’re coming for you next: A leftist candidate, Tiffany Cabán, backed by socialists Alexandra Ocasio-Cortez (D-New York) and Senator Bernie Sanders (D-Vermont), has won an election for Queens District Attorney in New York.

Cabán, Alexandria Ocasio-Cortez’s preferred pick for the office, garnered 39.5% of the vote compared to Democratic rival Melinda Katz’s 38.3% with 98% of precincts reporting.

The election was close enough that they will do a recount, but I don’t think that will change the result, which clearly shows that New Yorkers have not been put off in the slightest by Ocasio-Cortez’s extreme leftist positions, as many conservative pundits have assumed. If anything, her upfront willingness to push her beliefs, no matter our senseless or impractical or ignorant, have garnered her side more support.

I am reminded again of this quote from Walter Miller’s great end-of-the-world science fiction novel, A Canticle for Leibowitz:

Listen, are we helpless? Are we doomed to do it again and again and again? Have we no choice but to play the Phoenix in an unending sequence of rise and fall? Assyria, Babylon, Egypt, Greece, Carthage, Rome, the Empires of Charlemagne and the Turk. Ground to dust and plowed with salt. Spain, France, Britain, America–burned into the oblivion of the centuries. And again and again and again.

Are we doomed to it, Lord, chained to the pendulum of our own mad clockwork, helpless to halt its swing?

It doesn’t seem to matter that communism, socialism, fascism, Nazism, all top-down authoritarian systems no matter what their name or design, have consistently failed, and failed horribly, causing the deaths of millions and millions. Worse, these failures have not been in the distant past, but within the lifetimes of almost everyone living today. Several (Venezuela and North Korea) are occurring right this minute.

Yet, Americans want to try it for themselves. Sadly, they (and we) will reap the whirlwind, for it will fail again, as horribly as it has every other time.