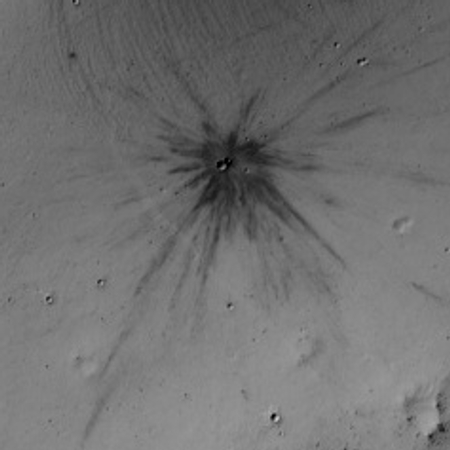 Cool image time! While finding recent impacts on Mars is not that unusual, the image to the right, found among the November image download from the high resolution camera on Mars Reconnaissance Orbiter (MRO), was dramatic enough that I decided that more people besides planetary scientists should see it. For scale the photograph is exactly 500 meters wide.

The photograph, taken September 26, 2019, also illustrates all the typical aspects of impact craters, and how they change the landscape.

This impact took place sometime between July 17, 2012 and January 4, 2018. We know this because it wasn’t there in a low-resolution image taken by the wide angle survey camera on MRO on the first date but was there when that same camera took another picture on the second date. Below is a side-by-side comparison of that July 17, 2012 image with the high resolution 2019 image above.
END_OF_DOCUMENT_TOKEN_TO_BE_REPLACED

Surprise! The EPA, when ordered by Congress to release documents describing that agency’s planning prior to the toxic waste disaster it caused in Colorado, has failed to meet the deadline set by Congress for turning over those documents.

“It is disappointing, but not surprising, that the EPA failed to meet the House Science Committee’s reasonable deadline in turning over documents pertaining to the Gold King Mine spill,” said Rep. Lamar Smith (R-TX). “These documents are essential to the Committee’s ongoing investigation and our upcoming hearing on Sept. 9. But more importantly, this information matters to the many Americans directly affected in western states, who are still waiting for answers from the EPA.”

Smith – who frequently spars with the EPA – is chairman of the House Science, Space, and Technology Committee. EPA director Gina McCarthy has been asked to appear and answer questions about the agency’s role in creating a 3-million-gallon toxic spill into Colorado’s Animas River on Aug. 5. Critics say McCarthy and the EPA have been unresponsive, secretive and unsympathetic toward millions of people who live in three states bordering the river.

The word “coverup” comes to mind, though how could anyone believe that the Obama administration (the most transparent in history!) would do such a thing baffles the mind.

Guess who didn’t think and in what context!