Avalanches on an asteroid
October 29, 2014 at 9:12 am Robert Zimmerman Points of Information

A new analysis predicts that when the asteroid Apophis flies past the Earth in 2029, the close fly-by will cause avalanches on the asteroid.

If asteroids pass close to Earth, they begin to experience the effects of our planet’s gravity. Just like the moon pushes and pulls the oceans, creating the tides, asteroids are susceptible to tidal forces from our planet. To judge what effect this will have on Apophis, scientists need to know what it’s made of. Their best guess is based on photos taken by a Japanese spacecraft named Hayabusa, which took detailed pictures of an Apophis-sized asteroid named Itokawa. Those images revealed that the asteroid wasn’t a solid mass of rock spinning through space, but rather a giant clump of debris held together loosely by gravity. “You look at the [Hayabusa] pictures and you’re like, ‘Uh, that’s a pile of rocks, dude.’ It’s very likely that Apophis is similar,” says astrophysicist Derek Richardson of the University of Maryland, College Park.

To show that Earth’s gravity could cause some of these rocks to tumble, Richardson and his colleagues developed a computer model that allowed them to place virtual sand piles across the surface of a model asteroid with roughly the same dimensions as Apophis. By factoring in the gravity from the asteroid, the tidal force from Earth, centrifugal force caused by the asteroid’s rotation, inertial forces, and other effects, the team was able to predict how the particles on the surface of the asteroid would behave on approach. The results confirm that Earth’s tidal forces would be strong enough to cause tiny avalanches on the asteroid, the team reported online ahead of print in Icarus.

Need I note that there are a lot of uncertainties here? Because they are using what is known about a different asteroid, all of their assumptions about Apophis’s properties in their computer model could be very wrong.

Still, this is interesting, because it does demonstrate that an asteroid could be significantly disturbed simply by flying past a planet.

An detailed analysis of the tumbling of the asteroid Apophis, detected by radar observations in January, suggests it will be easier to predict the asteroid’s orbit in the future.
April 19, 2013 at 10:15 am Robert Zimmerman Points of Information

The sky isn’t falling: A detailed analysis of the tumbling of the asteroid Apophis, detected by radar observations in January, suggests it will be easier to predict the asteroid’s orbit in the future.

The gentle but persistent nudging [of the Yarkovsky effect] arises when sunlight is absorbed by a rotating object and then reradiated as heat in some other direction. In particular, if Apophis were spinning retrograde (opposite the way Earth does), then over time its orbit would change in a way that increases the chance of impact in 2036. But now we can rest easy, because Apophis appears to be tumbling as it orbits the Sun. That’s the conclusion reached by a team of telescopic observers who monitored the asteroid’s light curve as it passed near Earth in January. Apophis is spinning around two axes at the same time, implying that any Sun-warmed surfaces are radiating heat in all directions, not just one in particular.

It is very difficult to measure the Yarkovsky effect, thus making it very difficult to precisely calculate the orbits of many near Earth asteroids. In the case of Apophis, however, it appears the astronomers have gotten a good handle on the problem.

New data has allowed scientists to lower the chance that the asteroid Apophis will hit the Earth in a future orbit.
February 21, 2013 at 10:32 pm Robert Zimmerman Points of Information

New data has allowed scientists to lower the chance that the asteroid Apophis will hit the Earth in a future orbit.

Recent observations from Pan-STARRS PS1 telescope at Haleakala, Hawaii have reduced the current orbital uncertainty by a factor of 5, and radar observations in early 2013 from Goldstone and Arecibo will further improve the knowledge of Apophis’ current position. However, the current knowledge is now precise enough that the uncertainty in predicting the position in 2029 is completely dominated by the so-called Yarkovsky effect, a subtle nongravitational perturbation due to thermal re-radiation of solar energy absorbed by the asteroid. The Yarkovsky effect depends on the asteroid’s size, mass, thermal properties, and critically on the orientation of the asteroid’s spin axis, which is currently unknown. This means that predictions for the 2029 Earth encounter will not improve significantly until these physical and spin characteristics are better determined.

The new report, which does not make use of the 2013 radar measurements, identifies over a dozen keyholes that fall within the range of possible 2029 encounter distances. Notably, the potential impact in 2036 that had previously held the highest probability has been effectively ruled out since its probability has fallen to well below one chance in one million. Indeed only one of the potential impacts has a probability of impact greater than 1-in-a-million; there is a 2-meter wide keyhole that leads to an impact in 2068, with impact odds of about 2.3 in a million.

The second paragraph basically says that the keyholes that might bring Apophis back to Earth are very small, making it unlikely that the asteroid will fly through any one of them in 2029. The first paragraph however notes that it will be impossible to chart the asteroid’s course accurately enough to rule out this possibility until we have more data on the asteroid itself.

New radar data of Apophis now indicates that its chances of the asteroid hitting the Earth in 2036 is zero.
January 10, 2013 at 9:42 am Robert Zimmerman Points of Information

The sky is not failing: New radar data of Apophis now indicates that its chances of the asteroid hitting the Earth in 2036 is zero.

This data doesn’t eliminate the chance of a collision, only postpones it much farther into the future.

New data from the Herschel Space Telescope suggests that the asteroid Apophis is bigger and less reflective than previous believed.
January 9, 2013 at 11:04 am Robert Zimmerman Points of Information

More Apophis news: New data from the Herschel Space Telescope suggests that the asteroid is bigger and less reflective than previous believed.

Instead of 900 feet across, they now estimate it has a diameter of about 1070 feet. And knowing that the asteroid has a lower albedo means that astronomers will be better able to gauge the effect of solar radiation on Apophis’s orbit.

How to watch the asteroid Apophis as it makes its not-so-close approach to Earth today.
January 9, 2013 at 9:24 am Robert Zimmerman Points of Information

How to watch the asteroid Apophis as it makes its not-so-close approach to Earth today. More here.

On Wednesday Apophis will pass the Earth at a distance of 9 million miles, allowing astronomers to gather more data about this asteroid’s orbit and composition.
January 7, 2013 at 9:01 am Robert Zimmerman Points of Information

On Wednesday Apophis will pass the Earth at a distance of 9 million miles, allowing astronomers to gather more data about this asteroid’s orbit and composition.

Having crossed outside Earth’s orbit, Apophis will appear briefly in the night-time sky. Wednesday 9 January will afford astronomers the rare opportunity to bring a battery of telescopes to bear: from optical telescopes to radio telescopes to the European Space Agency’s Infrared Space Observatory Herschel. Two of the biggest unknowns that remain to be established are the asteroid’s mass and the way it is spinning. Both of these affect the asteroid’s orbit and without them, precise calculations cannot be made.

Firing paintballs at an asteroid to prevent it from hitting the Earth.
October 26, 2012 at 9:32 am Robert Zimmerman Points of Information

Firing paintballs at an asteroid to prevent it from hitting the Earth.

Using a solar sail to deflect an earth-destroying asteroid 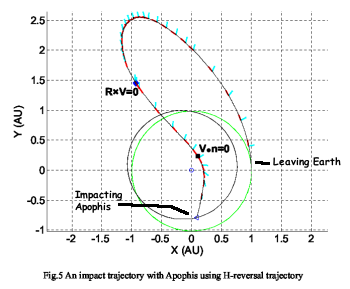 In a paper published today on the Los Alamos astro-ph preprint website, two Chinese scientists have proposed using a solar sail for deflecting any asteroid that happens to be aimed at the earth. The diagram to the right is their simulated mission to impact the asteroid Apophis, which will pass close to the earth in 2029 and — depending on whether that flyby puts it through a very small 600 meter-wide mathematical “keyhole” — could then return in 2036 on a collision course.

The idea is to use the sail to slow the spacecraft down enough so that it starts to fall towards the sun. The sail is then used to maneuver it into a retrograde orbit. When it impacts the asteroid the impact will therefore be similar to a head-on collision, thereby imputing the most energy in the least amount of time with the least amount of rocket fuel. In their Apophis simulation, a mission, weighing only 10 kilograms (about 22 pounds), launched around 2025, and hitting the asteroid in this manner in 2026, would deflect its flyby in 2029 enough to guarantee it will not fly through the “keyhole” and therefore eliminate any chance of it hitting the earth in 2036.

Obviously many questions must be answered before such a mission should fly.
END_OF_DOCUMENT_TOKEN_TO_BE_REPLACED

An image of Apophis
March 10, 2011 at 8:10 am Robert Zimmerman Points of Information

Astronomers from the University of Hawaii have taken new images of the potentially dangerous asteroid Apophis in an effort to refine their understanding of its orbital path.

Another scheme to stop a dangerous asteroid: Use a flotilla of solar sails to divert Apophis.

Impact possibility of Apophis increased
September 15, 2010 at 12:49 am Robert Zimmerman Points of Information

In a preprint paper [pdf] posted on the astro-ph website tonight, scientists have increased the odds, by one order of magnitude, that the asteroid Apophis will hit the Earth on April 13, 2036. Fortunately, these new odds remain low, at 1 chance in 4.5 million.