The lander is still being assembled, said John Thornton, chief executive of Astrobotic. Remaining work includes installation of its solar panels, two fuel tanks and decks holding payloads. The engines are “just about done,” he said, and will soon be installed.

He was optimistic that remaining work will be done quickly. “In just a couple months’ time, this will be heading out to environmental testing,” he said, followed by shipment to the launch site late this year.

This announcement now strongly suggests that Peregrine would not have been ready for Vulcan’s original launch date in late 2021. Since then the delays by Blue Origin in developing Vulcan’s first stage BE-4 engine has pushed the rocket’s first launch back by more than a year, time that apparently Astrobotics needed to finish Peregrine. 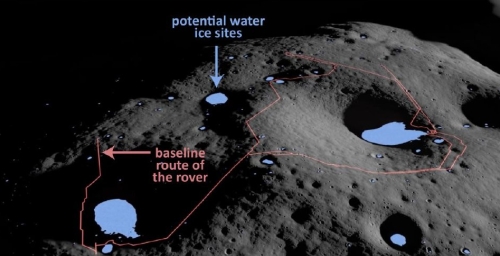 According to a report [pdf] issued today by NASA’s inspector general, the agency’s VIPER lunar rover mission is generally on schedule for its ’23 launch, though it has experienced some cost increases and still carries some scheduling risks, mostly related to the development of Astrobotic’s commercial Griffin lunar lander, and its precursor Peregrine mission that ULA hopes to launch on its first Vulcan rocket test.

Although Astrobotic personnel explained that Griffin’s development schedule is largely independent of its Peregrine mission, the Peregrine Lander—planned to launch in 2022—has multiple systems and subsystems that will also be used on Griffin. Therefore, any technical problems with these systems may adversely affect development of the Griffin Lander because Astrobotic would only have about a year, depending on the Peregrine launch date and start of lunar operations, to resolve the issues prior to NASA delivering VIPER for integration and launch. Furthermore, any failures during the Peregrine mission may lead to Griffin delays as NASA and Astrobotic investigate the failures and develop corrective actions.

In addition, VIPER long-lead acquisitions—such as the rover solar power array and avionics unit—have been affected by aerospace industry supply chain delays caused by COVID-19 as have delivery of computer boards and motor parts. Both of these issues have impacted design verification testing needed for the mission’s Critical Design Review, while COVID-19 also delayed some component development schedules.

Peregrine’s launch has been delayed by a year because Vulcan has been delayed because of Blue Origin’s problems with the BE-4 rocket engine. Though ULA hopes the Vulcan/Peregrine launch can occur late this year, that date remains very much in doubt. Further launch delays would thus threaten the launch of Griffin and VIPER.

As for the cost increases, the IG found that NASA had been forced to increase the budget for VIPER by 18.1%, a relatively minor increase compared to many of NASA’s other big projects. The IG noted however that further cost overruns are very possible, especially if the Peregrine mission experiences problems.

The photo above shows the rover’s presently planned route in the relatively flat area about 85 miles from the Moon’s south pole and near the western edge of Nobile Crater (pronounced No-BEEL-e).

Capitalism in space: NASA today awarded the private company Astrobotic a $199 million contract to provide the lander that place place the agency’s VIPER rover down near Moon’s south pole.

The target date for the mission is late 2023, and is intended as a scouting mission for the Artemis manned landing to follow.

During its 100-Earth-day mission, the approximately 1,000-pound VIPER rover will roam several miles and use its four science instruments to sample various soil environments. Versions of its three water-hunting instruments are flying to the Moon on earlier CLPS lander deliveries in 2021 and 2022 to help test their performance on the lunar surface prior to VIPER’s mission. The rover also will have a drill to bore approximately 3 feet into the lunar surface.

The key to this mission continues to be NASA’s shift from building things to hiring others to build them. If Astrobotic is successfully, they will then be positioned to offer their lander design to others, since it belongs to them, not NASA.

Capitalism in space: Spacebit, a United Kingdom company, has signed a deal to put an instrument on Astrobotic’s first lunar lander, Peregrine-1, set for launch by 2021.

Astrobotic was one of the three private companies awarded NASA contracts to build unmanned lunar landers to carry NASA instruments to the Moon. In addition, these companies could sell additional space to other private companies. According to the press release, Astrobotic already has a manifest of sixteen such contracts.

Capitalism in space: Astrobotic, the private company building a lunar lander for NASA, has chosen ULA’s Vulcan rocket for its launch vehicle.

Astrobotic announced today that it selected United Launch Alliance’s (ULA) Vulcan Centaur rocket in a competitive commercial procurement to launch its Peregrine lunar lander to the Moon in 2021.

“We are so excited to sign with ULA and fly Peregrine on Vulcan Centaur. This contract with ULA was the result of a highly competitive commercial process, and we are grateful to everyone involved in helping us make low-cost lunar transportation possible. When we launch the first lunar lander from American soil since Apollo, onboard the first Vulcan Centaur rocket, it will be a historic day for the country and commercial enterprise,” said Astrobotic CEO, John Thornton.

This is the second contract announcement for ULA’s Vulcan rocket, with the first being Sierra Nevada’s announcement that it would use Vulcan for Dream Chaser’s first six flights.

Isn’t competition wonderful? It appears to me that ULA must be offering very cut-rate deals to get these contracts, since the rocket has not yet flown while SpaceX’s already operational Falcon Heavy (with three successful launches) could easily do the job and is a very inexpensive rocket to fly. These lower prices, instigated by competition and freedom, will mean that funding missions to the Moon will continue to become more likely, even if NASA and the federal government fail to get their act together.

A competitor has debuted its full-size prototype rover designed to hunt for water in the craters of the Moon.
October 8, 2012 9:23 pm Robert Zimmerman

The Google Lunar X-Prize: One competitor has unveiled its full-size prototype rover, designed to hunt for water in the craters of the Moon.

The company, Astrobotic Technology, is consider to be in second place in the race to build the first private lunar rover.